If you came here to learn wrestling strength training like Triple H and John Cena, or how you can jump higher off of the top rope, you’ve found the wrong wrestling. If we were to refer to South Park, this is strength training for real wrasslin’!

Wrestling likely benefits the most from physicality compared to other forms of martial arts. In fact, an old study concluded that physiological variables (such as strength) are the best way to predict success in elite-level wrestlers [1].

To gain the truest understanding of how important strength training is for wrestling, we need to compare strength and power capabilities of elite and non-elite wrestlers. If elite wrestlers are stronger in certain areas, we can conclude with relative certainty that they are important for high-level wrestling performance. 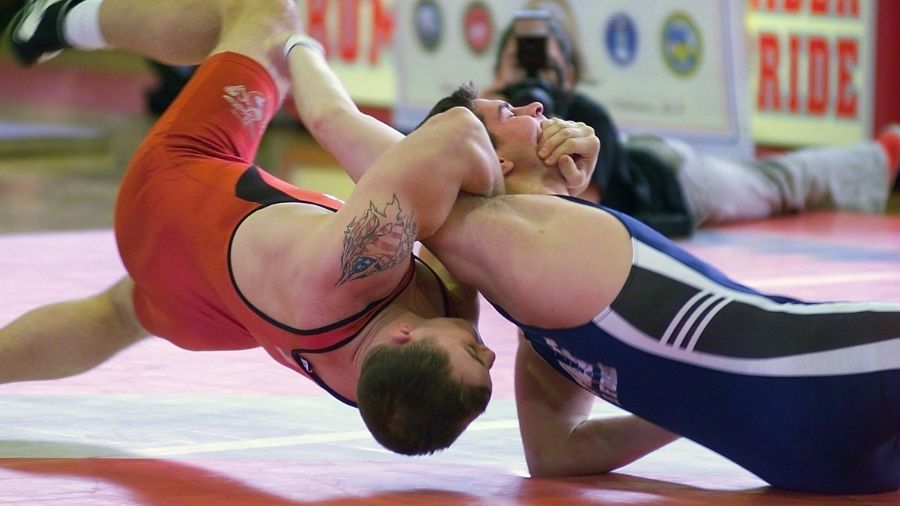 Maximal dynamic and isometric strength has been well researched within the wrestling community. Rightly so as wrestling requires picking up and moving other humans of similar size. Maximal strength in wrestling exceeds values seen in the striking arts but are comparable to other grappling arts such as judo [2]. Highlighting the different physical requirements needed for these martial arts.

126 male wrestlers were categorized as top elite, elite, and amateur wrestlers [3]. The top elite were those who won medals at European and/or World Championships. Elite wrestlers participated in these events but didn’t win a medal and amateurs did not compete.

The researchers did not find any differences between levels regarding isometric grip strength, back strength or leg strength regardless of weight class. It seems in this cohort of wrestlers, strength wasn’t a discriminating factor.

But we can’t draw conclusions from one study!

Let’s take a look at a case study involving the Iranian 4x World senior Greco-Roman wrestling champion in the 55 kg weight class [4]. This wrestler was able to complete 30% more pull-ups and 8% more sit-ups than the National norms highlighting the enhanced muscular endurance qualities he possesses.

He was also stronger in the back squat compared to National norms relative to body weight (1.83 vs. 1.79 respectively). However, his bench press was lower at 1.39 vs. 1.48 relative to bodyweight.

Furthermore, research on elite Junior Turkish wrestlers compared strength measurements between those who were selected for the National Team for the World Championships versus those who were not [7].

While they didn’t measure the traditional dynamic lifts such as the squat and bench press, they measured isometric grip, back, and leg strength.

Elite wrestlers had higher bench presses (1.1 vs. 0.9) and squats (1.4 vs. 1.1) relative to bodyweight compared to sub-elite wrestlers.

Adding to this body of evidence is a 2011 study that set out to find which physical factors predict wrestling performance by comparing elite and amateur wrestlers by bodyweight (lightweight, middleweight, and heavyweight) [9]. Elite wrestlers had more fat-free mass, and 12-26% greater squat and bench press compared to amateurs.

Maximum muscle power was also much higher for these exercises ranging from 14-30% greater than seen in amateur wrestlers. It seemed that age and physical training experience wasn’t the distinguishing factor regarding muscle strength and power, but rather fat-free mass.

The load that maximized power in the squat was approximately 60-65% 1RM and bench press approximately 34-37% 1RM regardless of weight class providing some important actionable information to inform strength programming.

Elite wrestlers also showed stronger grip strength in the light and middleweight classes ranging from 6-19% greater but no differences were seen in heavyweights. Maximal back strength was also much higher in elites than amateurs at 7-20%.

Overall, we can conclude that dynamic and isometric physical strength is an important determinant to wrestling success and should be prioritized within a wrestler’s training program. 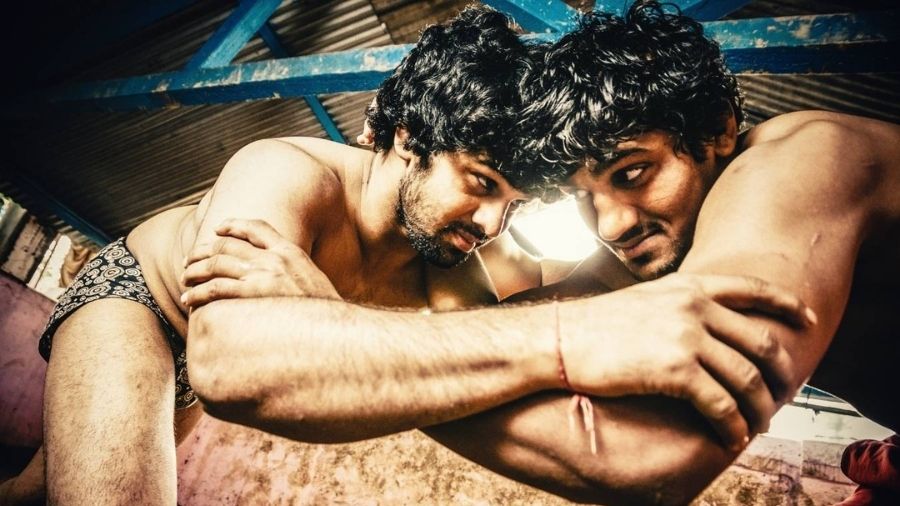 Both Freestyle and Greco-Roman wrestling are Olympic sports. Freestyle wrestling is characterized by the use of explosive techniques over a 2 x 3-minute bout. The main distinction is the ability to use upper and lower body wrestling while Greco-Roman only allows upper body techniques [10]. Do these differences influence the physical profiles of elite wrestlers?

Junior Greco-Roman and Freestyle wrestlers of the Polish National team were compared through a range of physical tests [11]. Freestyle wrestlers showed greater strength endurance of the trunk (sit-ups and side twists) and the upper body (pull-ups and dips).

This may be explained by the number of techniques that can be used to end a match by either using the arms or legs such as various leg locks making it attack-oriented wrestling.

A more recent study on junior Turkish wrestlers found slightly different results where no differences were found in strength (grip and back) between wrestling styles except for isometric leg strength being higher in Greco-Roman wrestlers [10].

Perhaps the differences found in these studies could come down to the testing modalities used with the former using dynamic strength endurance tests where the latter used isometric tests. As both wrestling styles require high-levels of isometric strength, perhaps these values won’t differ to the same extent as dynamic movement when freestyle wrestling is considered a more explosive style.

Understanding how a wrestling tournament may impact strength as matches’ progress may provide some valuable insight into strength training preparation. So one study followed Division I freestyle wrestlers who were National and International competitors over a 2-day simulated tournament after a weight cut [12].

Day 1 had 3, 5 minutes matches while Day 2 had 2 matches. As we know, there can be some differences between sparring and competitive matches so to make the environment more competitive, wrestlers were competing for a starting position within their weight class.

Both handgrip and bear hug strength declined from the first match compared to baseline over the 2 days. Vertical jump only declined at the start of Day 2 likely due to the increased concentrations of the muscle damage marker creatine kinase.

Further, reductions in slower velocity and isometric elbow and knee strength were observed throughout the tournament showing slower, maximal strength movements to be more susceptible to fatigue compared to faster velocity movements.

It may be pertinent to emphasize isometric, maximal strength, and strength endurance over higher-velocity strength training due to the high levels of fatigue present in tournaments as well as strength being a major predictor of wrestling success. 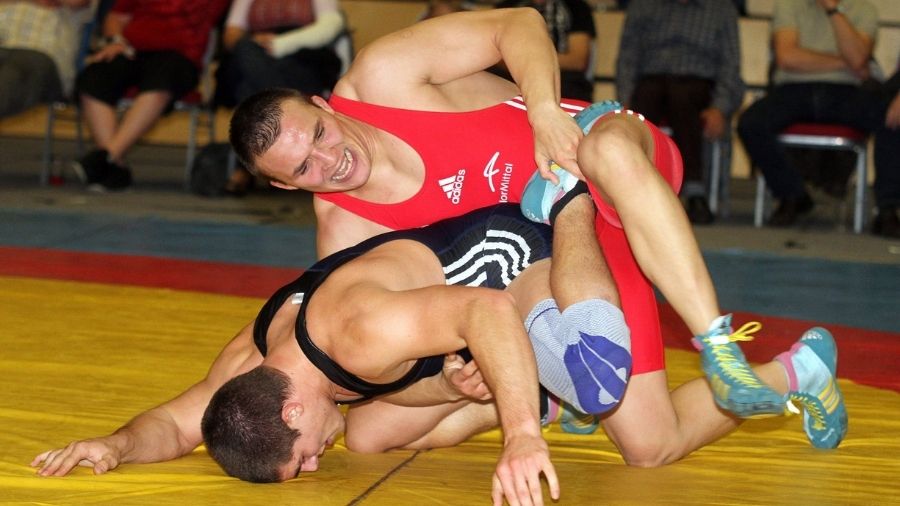 Starting at the American high school level, the most commonly injured areas were the shoulder (24%) and knee (17%) [13]. Shoulder injuries were mainly rotator cuff muscle strains and knee injuries mainly contusions and meniscus tears. Ankles were the most common joint sprain.

When looking at the Olympic level, the 2008 Beijing Olympics showed freestyle wrestling had the highest injury rates [15]. Most injuries were cuts (60%) and sprains (25%) with the upper body having more injuries than the lower body.

The 2016 Rio Olympics showed similar findings with the most common injury being cuts and contusions (55%) but with both freestyle and Greco-Roman sustaining high injury rates (36% & 41% respectively) [16].

We can conclude that strengthening the shoulder, knee, and ankles should remain a strong focus throughout a strength training plan for wrestling. 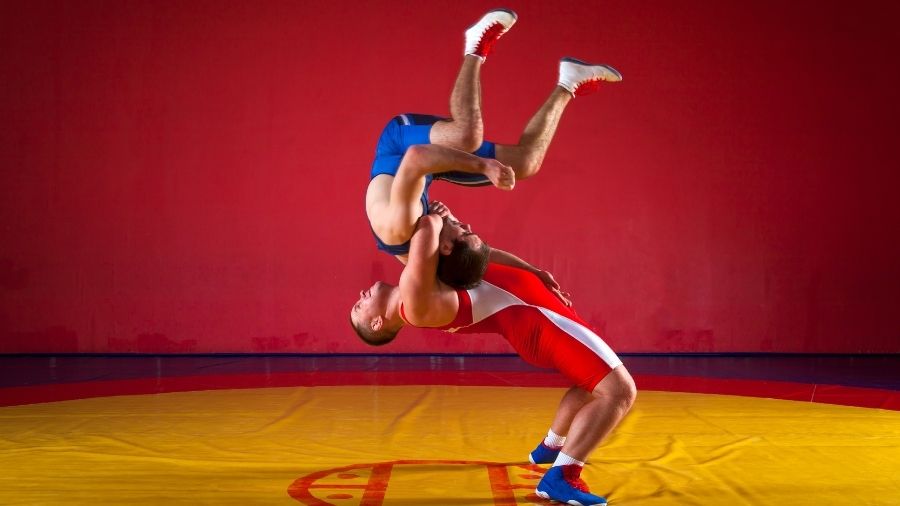 While there are potentially small differences between freestyle and Greco-Roman, this will be an example of an overall strength program for wrestling.

I’ve set this up in two phases as I’ve done with the other strength training programs on Sweet Science of Fighting. Phase 1 will focus on developing maximal dynamic strength and sub-maximal isometric strength.

Phase 2 will continue to focus on maximal dynamic strength as well as maximal isometric strength. However, with some more advanced set/rep protocols. One being the use of cluster sets to maintain high-quality volume and potentially minimize some of the fatigue from the sets.

Reducing some of the fatigue is important as a high volume power training (HVPT) approach is taken with the jump squat and bench throw made popular by Alex Natera. HVPT improves not only maximal jump performance but also the ability to repeat power potentially beneficial for the explosive nature of freestyle wrestling.

This program will focus on a 3 day a week model as strength training is more important to wrestling than other martial arts may generally train 3-4x a week for their sport at least at the collegiate level and even less if it is the off-season. This program will have an off-season focus.

12-Week Off-Season Wrestling Strength & Conditioning Program that will give you elite level strength & conditioning specifically for wrestling so you can dominate the mats.