Don’t let the common karate view of lifting weights making you slow dissuade you from strength training. When performed correctly, strength training is only going to make you faster and enhance your karate performance.

Strength training for karate should focus on speed and explosive style training as they differentiate winners and losers in Karate Kumite. However, maximal strength predicts over 50% of punch acceleration in karateka meaning strength may also have an important role.

Further, it’s important to understand the common injuries that occur in karate to perform exercises to reduce the risk of injury. 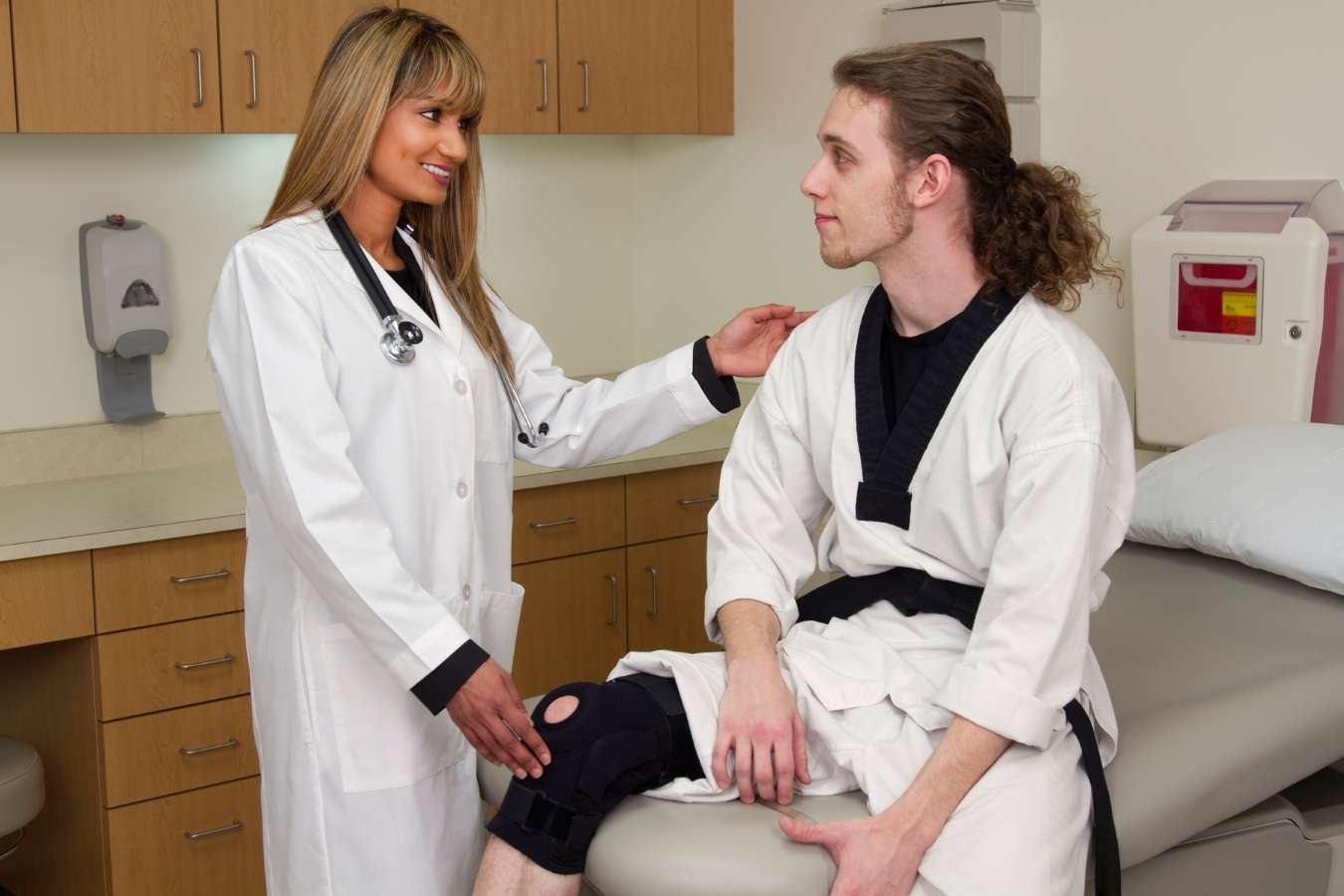 A survey of 204 karatekas in Dehli, India who were aspiring national and international level karatekas were found to have the most common injuries to the head and face [1]. 57% of injuries were sudden while 36% were gradual onset injuries.

These mostly occurred from direct contact from punches and kicks (65%) while 35% were non-contact related injuries.

At the higher level of World Karate Championships (WKC), 2,837 matches were analyzed over three tournaments [2].

Supporting the previously mentioned study, the majority of injuries were to the face (72%) and head (12%). The neck (4%) and upper arms (3%) were the next most injured sites.

Punches caused the greatest number of injuries at 83% while kicks caused 7%. This is likely due to punches being thrown 10 times more than kicks during Kumite [2].

Karate very rarely results in severe injury, and in this study only 3% of all injuries were severe. 89% were considered minor injuries.

Further, the lower the weight class, the higher number of injury incidences [3][4].

Regarding when injuries occur, most happened during fight practice (90%) to the head and neck [5].

Overall, many of these injuries aren’t preventable. However, due to the amount of head damage, strengthening of the neck to reduce the risk of concussion is a preventative measure that should be taken. 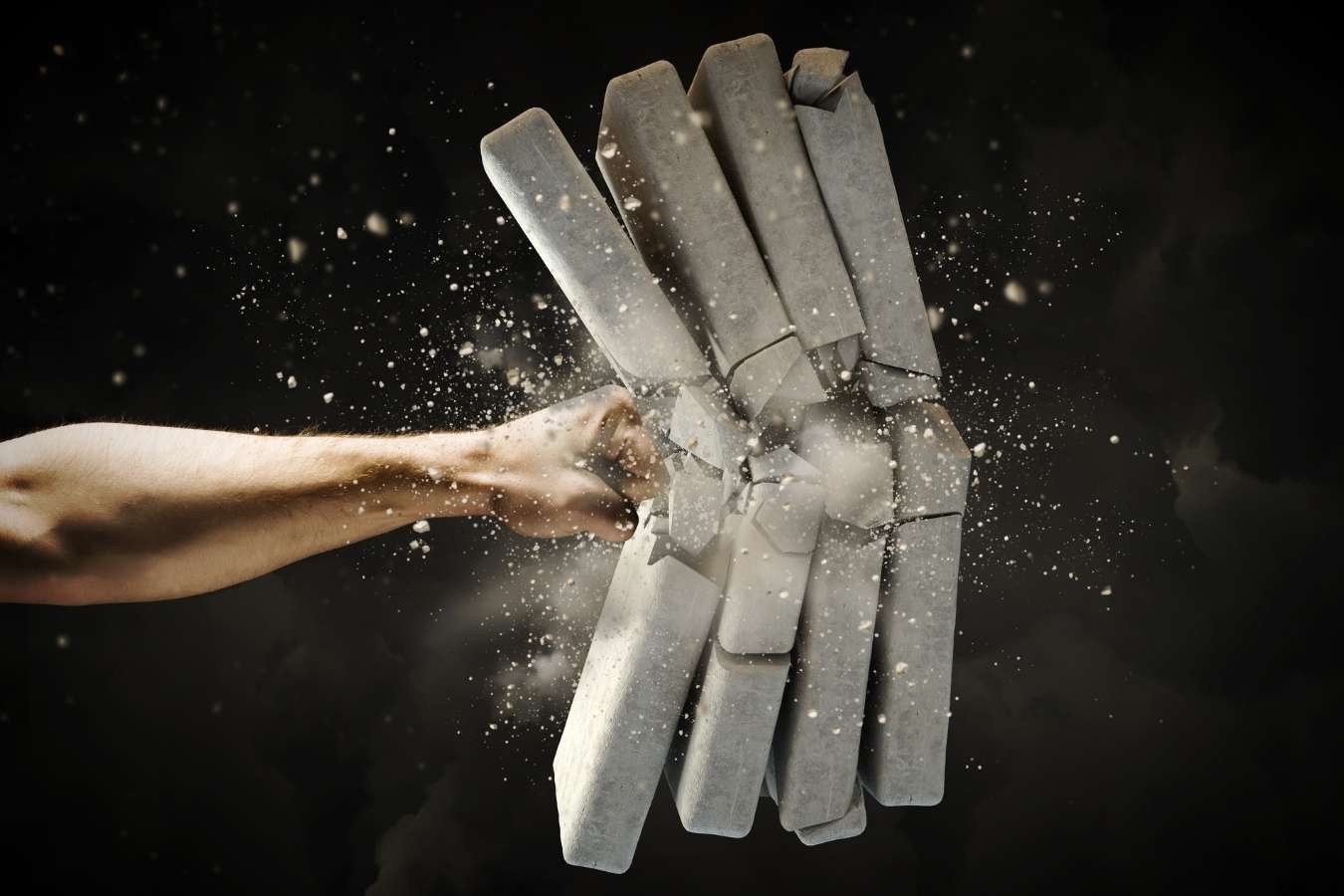 If I was to sum up all of the evidence in one sentence, it would be this.

Karate performance is highly influenced by speed and explosivity and not by so much by maximal strength.

Here is how I have come to that conclusion. 22 international and national level karateka were compared regarding force, velocity, and power metrics [6].

They found that international karateka had greater velocity and power scores by 13-14% compared to national level karateka.

Further, they were able to squat jump (pause during the dip so no elastic energy is used) 14% higher than the national level karateka.

What was not different between the groups were their force metrics indicating speed and power are what distinguish between high and lower-level karateka.

Contrary to this study, when 7 highly competitive black belts were compared to 9 novice white belts, the black belts displayed a significantly greater bench press and half squat 1RM [7]. Why are these findings so different?

Both plyometric and jump training have been shown to improve strength without the use of weight training [8][9].

Rather, peak power generated during a squat and bench press with 30% 1RM is what differentiated the two groups.

It seems, in agreement with the first study mentioned, that power output is a more important component of karate performance than maximal strength.

Another interesting study compared 6 elite, international karateka and 6 amateur karatekas who were put through isokinetic strength testing of the quads and hamstrings and testing of the front kick [11].

To explain isokinetic testing in layman’s terms, it involves being strapped into a chair similar to a seated leg extension and leg curl machine. The pad rests above and below the ankle and the movement is exactly the same as performing a leg extension or leg curl. 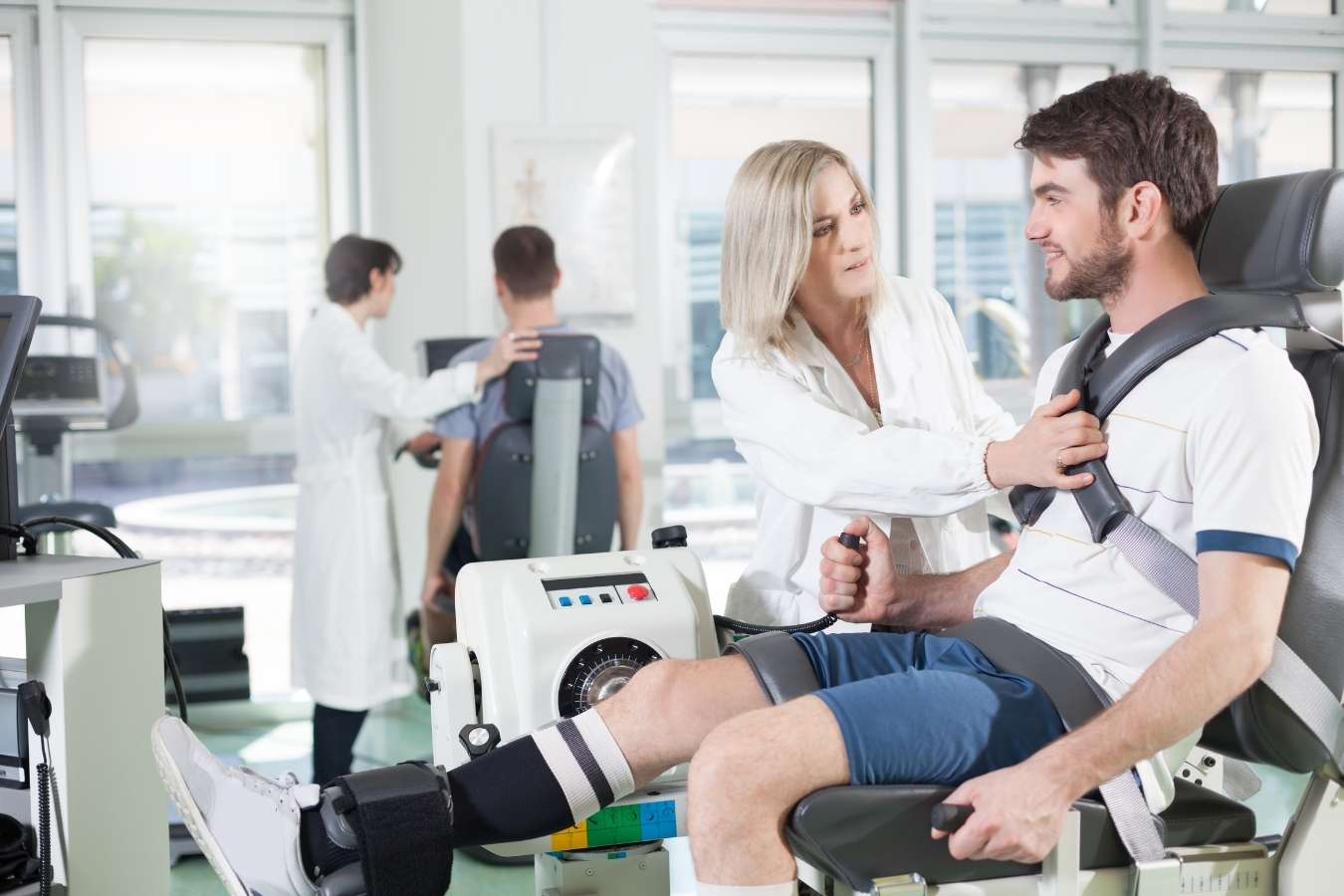 However, the computerized machine will set the movement of the pad at a certain speed and it. The individual will leg extension or leg curl as hard as possible against this constant speed of movement and force will be measured.

It gives an indication of the ability to produce or resist force (or torque as force is angular in this instance) at fast and slow speeds.

When comparing the international to amateur karateka, no difference was found in knee extension force (quads). But there were greater values for knee flexion (hamstrings) force at all speeds compared to amateurs.

International level karateka also had reduced antagonist (opposite to the muscle performing the work) activation at all velocities compared to amateurs.

This is conducive to increased speed as having a high activation of both agonist and antagonist is a protective mechanism that reduces speed.

This was backed up by the free-kick data where the international karatekas were faster at bringing the knee up and straightening the knee during the kick than amateurs.

What is interesting is that the biceps femoris (one of the hamstring muscles) was active during the whole knee straightening phase of the kick which is likely an adaptation imposed from the international rules where you can’t cause damage with a kick.

The increased activity of the biceps femoris is to apply intense braking forces to slow the limb down at impact. This means high levels of eccentric force capabilities are needed.

Conversely, amateur karateka did not show this phenomenon likely due to skill and strength deficiencies.

This is likely due to offensive style fighters needing to be explosive and fast in order to effectively land their attacks.

Overall, we can summarise these findings as needing to develop high levels of velocity and power along with eccentric hamstring strength at high velocities. 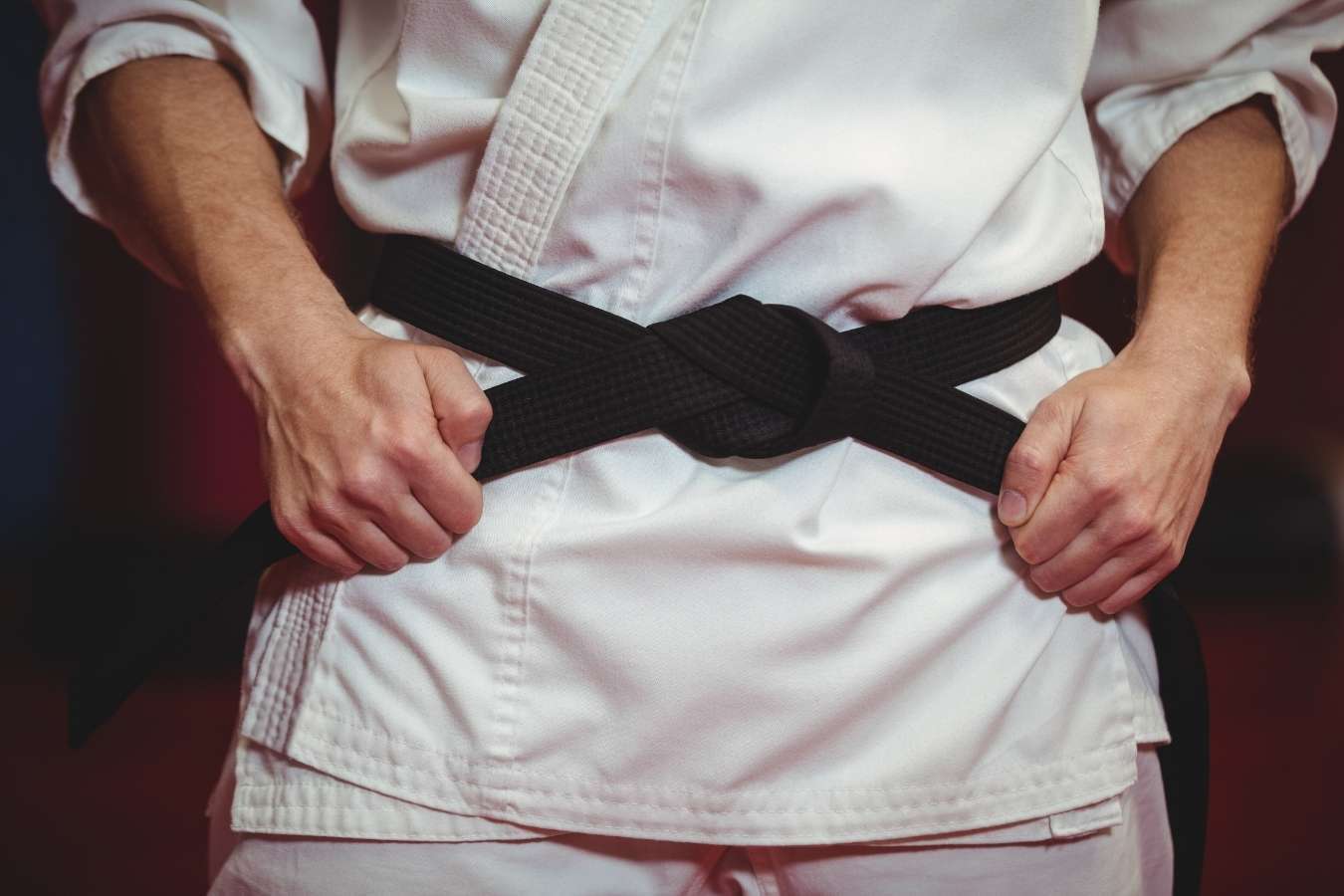 Research in this area is scarce. What we know from the data we have is karatekas display relatively good explosive power ranging from around 42-50 cm in height [13].

This jump height is heavily influenced by body fat percentage and fat-free mass meaning the leaner more muscular you are, the higher you will jump [14].

Regarding 1RM strength, elite karateka standards are around a 137 kg squat and an 87 kg bench press. Nothing to write home about but as we know, maximal strength may not have such a great influence on karate performance. 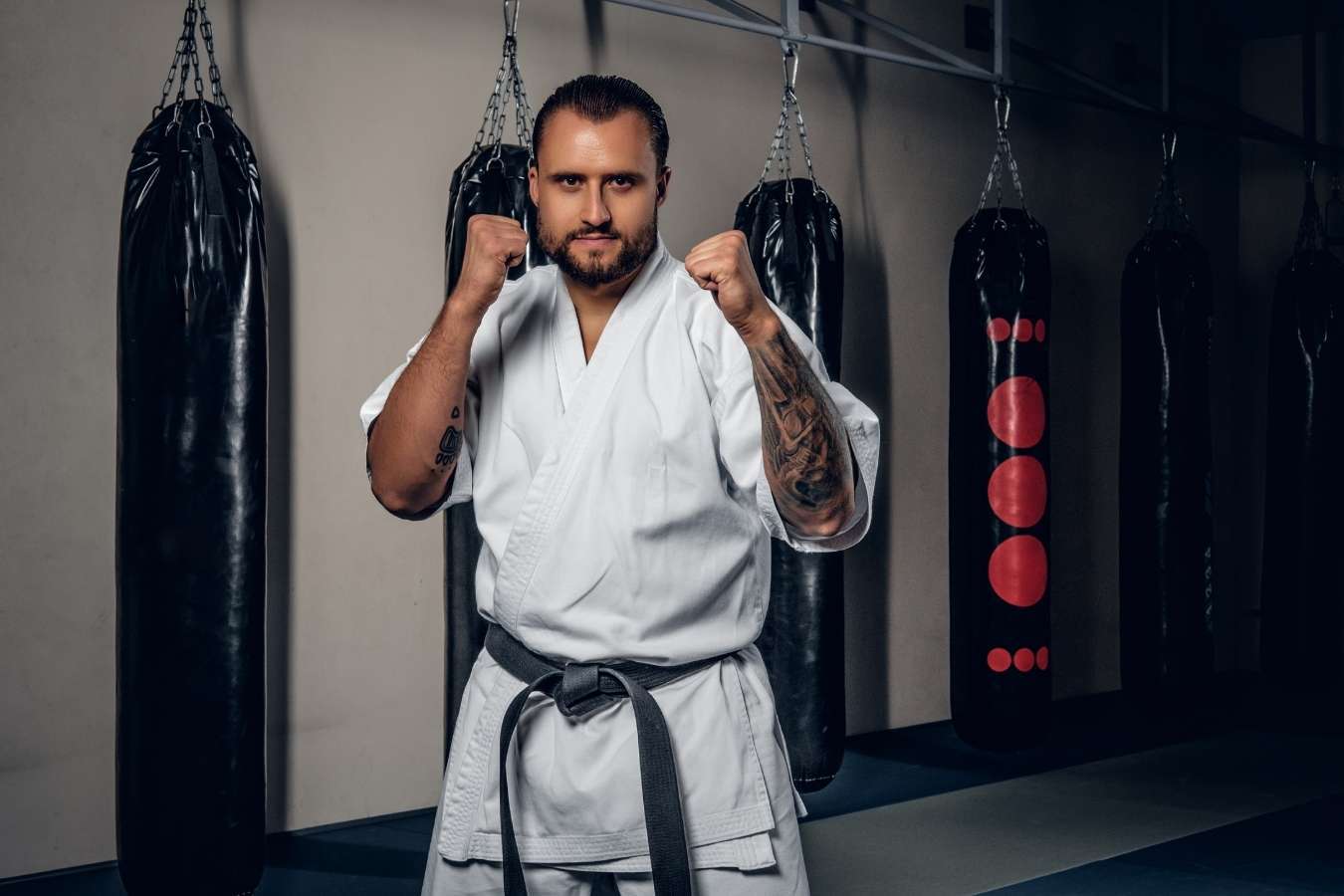 While this section focuses on Kumite, many of these same principles can be applied to training for karate kata as both require high levels of speed and power.

I mentioned previously that maximal strength potentially isn’t important for karate performance as it does not differentiate between winners and losers.

However, 56-65% of punch acceleration in elite karateka can be explained by average power in the jump squat relative to body weight, and either squat or bench press 1RM [12].

Similar findings have been found in the boxing population which you can read about here.

For that reason, some form of maximal strength should take place in a karate training program. Just not with a great emphasis.

Both plyometric and cluster set configurations have been shown to improve explosive power and maximal strength in karateka so these example programs will have a thread of these elements [15].

These will be in two phases. Phase 1 will be preparation for more intense plyometric and jump exercises along with “slower” strength exercises.

Phase 2 will be more specific to karate with more intense plyometrics and jumps and “faster” strength exercises. Strength training will occur two days a week to allow for adequate karate training.