Ask the average bro for strength training advice for BJJ and you’ll likely get “just lift weights bro” or “just get stronger in the squat, bench, and deadlift.” While maximal strength is an important quality that influences other strength characteristics, it is not as important in BJJ as it is in other sports.

However, as the sport of BJJ evolves, many of the top BJJ players are physically imposing and have the strength to match. Which begs the question, does strength provide a competitive advantage?

However, there is much more to strength training for BJJ than the squat, bench, and deadlift. While they provide a great stimulus for maximal strength, BJJ is a sport that requires muscular power and endurance in planes of movement outside of the typical ‘up and down.’

However, when accounting for bodyweight, there was no difference in bench press strength. Also, no difference was found between the groups in the squat.

It seems lower body strength may not be a differentiator between elite and non-elite BJJ practitioners. In fact, squat strength only ranged between 83-98 kg representing around 1.1-1.3 kg relative to body weight.

Muscular power output is important in BJJ during explosive actions such as sweeps and takedowns. High-level BJJ athletes have a vertical jump between 30-45 cm which is higher than Olympic wrestlers and elite judo athletes potentially highlighting the importance of having powerful legs for BJJ [2].

There was no difference in power output in the upper body using the bench press throw when comparing advanced and non-advanced BJJ athletes. Power was maximized in the throw at approximately 42% of bench press 1RM.

While there were no differences in leg or grip strength, pass fighters exhibited greater lower back endurance than guard fighters.

Based on all of the strength training research in BJJ, a general guideline for strength standards are [2]:

However, that doesn’t discount the potential benefits of having stronger legs. With technique being equal, you can potentially gain an advantage over an opponent with due to being stronger overall.

So instead of these standards, you can shoot for some typical strength standards of:

We can sum these findings up into some general principles for strength training for BJJ.

It’s important to note that if a physical metric doesn’t differentiate between elite and non-elite BJJ athletes, it likely has little bearing on BJJ performance. Sadly, there isn’t much research on this specific topic so some creative freedom will be used.

Further, having an elite level bench press isn’t going to turn you from a non-elite to an elite BJJ practitioner at the national or international level. BJJ skill will always trump strength. It could be that the elite level BJJ practitioners are generally better athletes than non-elite so have higher scores for some physical tests.

Or that elite level BJJ athletes place greater emphasis on their overall training off the mats. There are many factors that can influence these testing results.

How To Structure A Strength Training Program For BJJ

This is where the art and science of programming is blended together. To make things easier, there are some general guidelines that should be adhered to within a training day:

These guidelines ensure you get the most out of your strength and power training while minimizing the risk of injury.

Fast to slow means performing exercises on the velocity side of the force-velocity curve first in the workout. As you progress through the workout, the loading gets heavier, and therefore, the velocity decreases.

Complex to simple means performing movements that require a high level of coordination such as various jumps, throws, or Olympic lifts before simpler movements such as squats or single-limb movements.

It’s important to remember these guidelines serve as an overall guiding principles. It doesn’t mean that all exercises always have to be performed in these orders.

Sometimes, using rest periods to perform easier isolation exercises can be a great training strategy to make the most use of your time. You will see an example of this below.

When planning strength training sessions for the week, you need to choose how many days a week you’ll train. This is all going to depend on the time you have available. If you work full time, you may only have time to strength train 2 days a week when juggling BJJ training.

In my experience, performing strength training before BJJ training works best. Whether that’s directly before BJJ practice if you’re time-crunched or in the morning of your evening BJJ sessions if you have more time.

If you’re only drilling at BJJ, then strength training can be performed later in the day.

If you’ve ever tried strength training after a tough BJJ training session, you know it’s near impossible to do anything from the fatigue!

When training twice a week, both sessions should be full-body to take advantage of the limited training time.

So without further or do, here is a sample 2 day a week strength training program for BJJ.

If you are training BJJ 5+ times a week, I wouldn’t recommend performing three days of strength training a week. Twice a week is easily enough to get what you need done.

However, if you are training less BJJ and want to add in an extra strength training session to gain some size or just to feel stronger overall, here is how you can go about it.

Two days should be your ‘hard’ training sessions that involve full-body strength and power exercises. These will be complexed so the strength exercise will be followed by the velocity or power exercise. You can also use these complexes in the 2-Day schedule but I want to show another way of organizing your training program.

By doing this, we can take advantage of the post-activation potentiation phenomenon. This phenomenon was best described by Soviet researcher Dr. Verkhoshanksy. I paraphrase:

“Imagine what would happen if you lifted a half-full bottle of water when you thought the bottle was full. There’d be a mismatch between your perception of the force needed to move the bottle, and the actual force required. The bottle would move twice as fast as you intended.”

Using complexes is a more intermediate-advanced way of organising training so it is a good progression from moving from fast to slow exercises like in the 2-Day program.

One day will consist of ‘easy’ isolation or bodybuilding exercises to address muscular imbalances, general prehab, or overall hypertrophy.

Both maximal handgrip strength and strength endurance of the grip are important factors for BJJ performance.

With so many different grips used in BJJ, it’s important to train as many of them as possible either by making modifications to your main exercises or adding specific grip training exercises.

See my article “How To Improve Grip Strength For BJJ” for the different grips and training options.

If you refer to my “What Is Strength Training” article, I mention that bodyweight only training isn’t enough to get the most out of strength training. This is because various loading elicits different adaptations.

Here is a sample twice a week bodyweight strength training program for BJJ with the only piece of equipment being an elastic band:

These programs provided are very general plans. When programming for yourself, there will be individual factors to account for such as previous injuries, time, equipment, and space available, and individual strengths and weaknesses.

However, these examples will provide a framework to work off of. You can see the guiding principles in action such as moving from fast to slow movements during the training session. 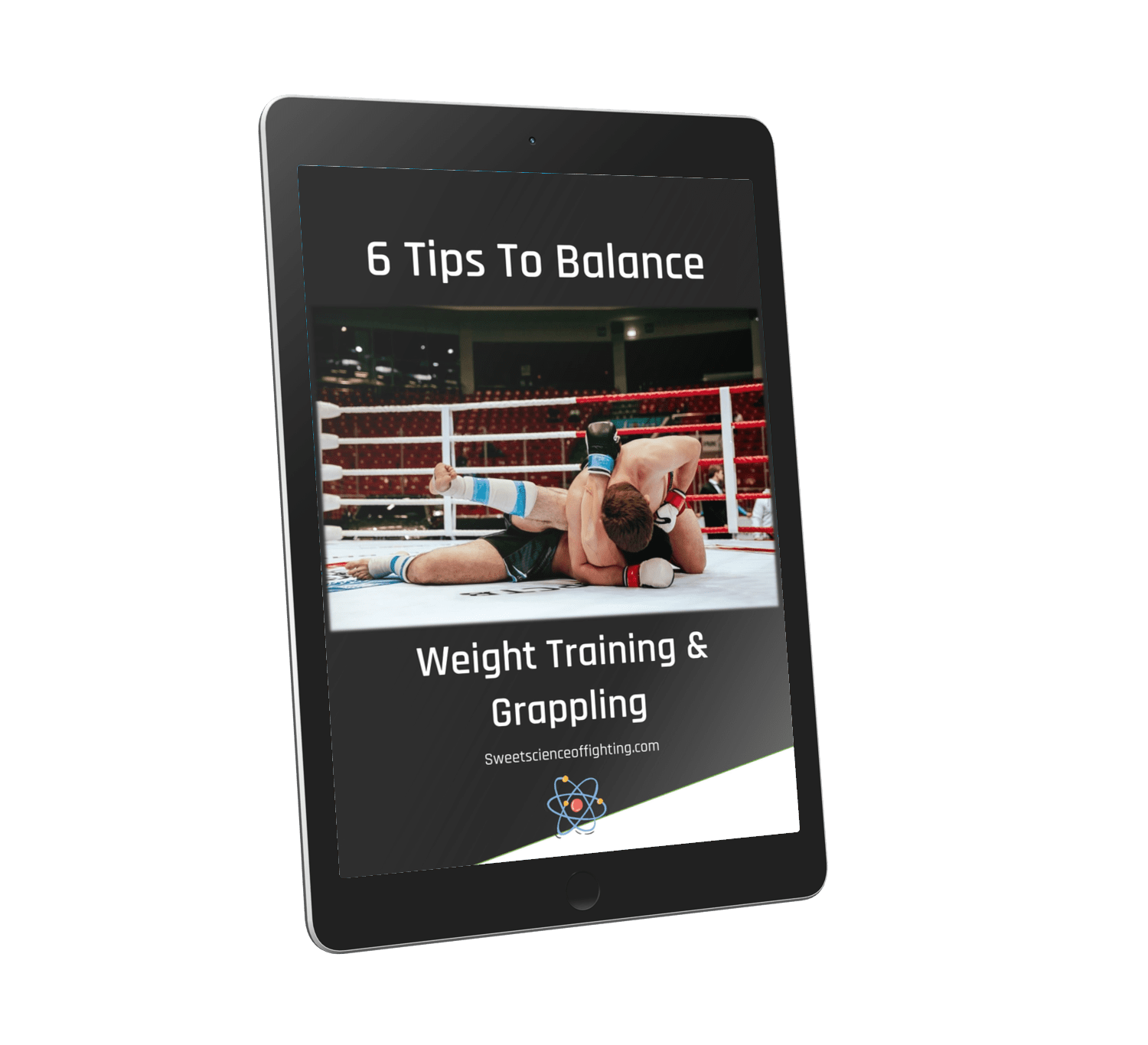 Subscribe below to get your "6 Tips for Balancing Weight Training & Grappling" eBook free!

I am a professional strength & conditioning coach that works with high-level teams and athletes. I review the latest research every month for Science for Sport and use my combined knowledge of research and experience to bring you the most practical bites to be applied to your combat training.

Sweetscienceoffighting.com is a participant in the Amazon Services LLC Associates Program, an affiliate advertising program designed to provide a means for sites to earn advertising fees by advertising and linking to Amazon.com. We are compensated for referring traffic and business to Amazon and other companies linked to on this site at no additional cost to you. 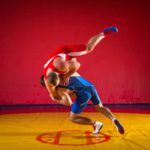 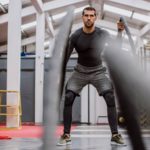 Sweetscienceoffighting.com is a participant in the Amazon Services LLC Associates Program, an affiliate advertising program designed to provide a means for sites to earn advertising fees by advertising and linking to Amazon.com. We are compensated for referring traffic and business to Amazon and other companies linked to on this site at no additional cost to you.

Back to Top
Close

Subscribe below to get your "6 Tips for Balancing Weight Training & Grappling" eBook free!

By signing up you agree to our terms and conditions