6 Ways To Never Gas Out During BJJ

There’s nothing worse. Being stuck on the bottom, not being able to properly defend submission attempts or position advances because you can barely catch your breath.

Then your opponent does the worst thing possible when you’re gassed, knee on belly. You can almost just tap from the pressure as you could already barely breathe!

Let’s avoid this scenario from now on using these six tips to ensure you never gas out.

Jiu-jitsu matches last anywhere from five to ten minutes under IBJJF rules depending on your belt grade all the way up to no time limit matches for submission-only tournaments. While competing and rolling may feel hard, the ability to roll hard for long periods comes down to having a well-developed aerobic energy system.

A common mistake many BJJ practitioners make is emphasizing the opposite energy system, the anaerobic lactic energy system through hard circuits and lung-busting finishers. 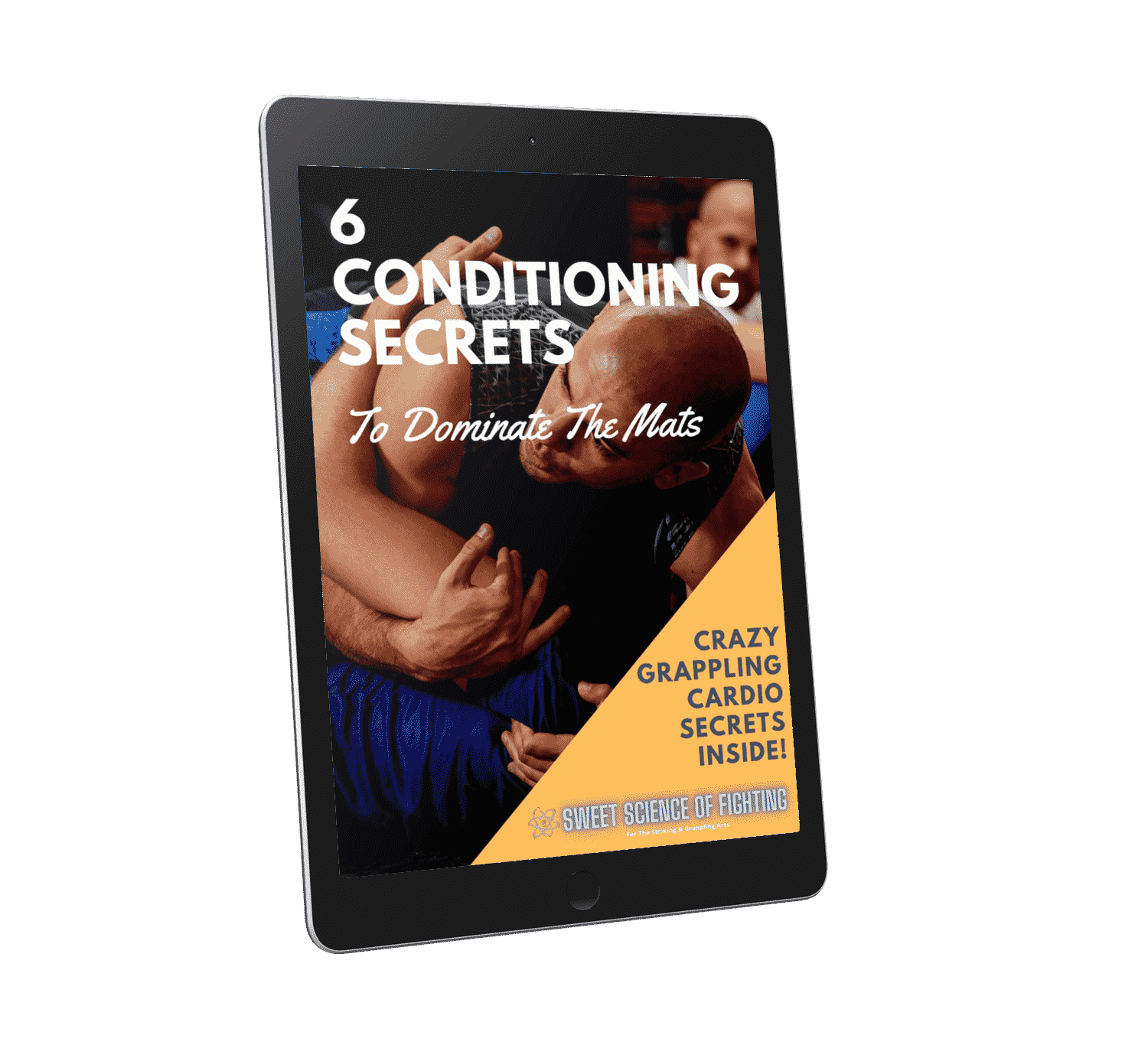 While lactate is always being produced (even when you’re sitting reading this), the aerobic pathway is able to use that lactate to generate energy. So, at low intensities, resulting in lower lactate accumulation, the aerobic energy system is predominantly in play.

As BJJ practitioners, we want to operate in a low-lactate environment for as long as possible. With high lactate comes high levels of nasty by-products that speed up fatigue causing us to gas out.

If we spend too much time conditioning our anaerobic lactic energy system, our aerobic energy system isn’t powerful enough to suck up all of this lactate, and therefore, by-products build up reducing the ability of the muscles to contract and produce force.

Resulting in gassing out on the mat and being forced to tap. How do we prioritize aerobic development? Low intensity, steady-state cardio is one option that provides very beneficial adaptations to the heart.

Other BJJ conditioning options are aerobic-based intervals which are sub-maximal work intensities with equal time to half working time as rest periods.

Being told just to roll more is the most common advice that I’ve heard and read when it comes to being in good condition for BJJ.

Indicating that BJJ isn’t enough to stop yourself gassing out. So if you’re preparing for a tournament, or just want to not gas during class, perform some of your own conditioning outside of BJJ.

Keep Conditioning As Close To BJJ As Possible

If you have the space and time, solo mat drills are the BEST way you can develop conditioning for BJJ. Performed in a low-intensity circuit fashion, or sub-maximal intensity interval fashion, you can build a huge gas tank.

For those who don’t have space, you may need to resort to traditional cardio such as running or cardio equipment. However, this should be your second choice.

Conditioning is more than just energy systems. You must also take into account movement economy and movement of the muscles during the conditioning exercise.

Firstly, have you ever wondered why rolling with your professor leaves you gassed while your professor barely looks like he’s broken a sweat? One of the main reasons is they’ve mastered the technical movements so well; they know how to execute them with as little effort as possible relying on leverage.

Secondly, your conditioning exercise should match BJJ as closely as possible as conditioning adaptations don’t just occur at the heart and lungs. Adaptations occur in the working muscles.

If you spend all of your conditioning time on a bike, then the legs will become more fatigue resistant but your upper body will likely be lacking.

Further, performing similar movements that you would during BJJ will condition your muscles for the exact working regime they will encounter during training enhancing your conditioning even further than someone using traditional cardio.

If you remember your white belt days, you may have been a spaz. Or so tense that you couldn’t last past 30 seconds. Learning to pace yourself, knowing when to relax and explode, and expending the exact amount of energy you need and no more are all skills you need to learn as a BJJ practitioner.

It doesn’t matter how much conditioning you do and how well conditioned you are, if you can’t do these things, you will gas out… fast!

Breathing comes part and parcel with pacing. You will find beginners hold their breath far too often as they push, tug, and squirm leaving them a heaping mess after each roll. Breathing ensures you get enough oxygen in.

It also helps to regulate your heart rate so you can save your energy for when you need to explode. It will also help you stay calm when you are in a submission so you can last longer to fight your way out of it.

Spend More Time On The Mats

Pacing and breathing don’t come naturally. They are developed with time on the mats. As you gain more experience training, you will start to feel more comfortable in different positions.

It’s these unknown positions and not knowing what to do that can cause a small panic in beginner BJJ practitioners. With experience, you know that you can relax in bad positions and wait for your opportunity.

So spend as much time as you can on the mats, but don’t forget to do that little bit of extra conditioning by yourself to ensure you don’t gas out.