Wrestling workouts are considered some of the hardest in any sport. Not surprising as wrestling requires manipulating another large human being and is considered the 5th hardest sport in the world. But being in condition for wrestling isn’t just about hard training.

Conditioning for wrestling requires high-levels of anaerobic power and capacity as elite wrestlers display greater values in this area making it a distinguishing factor for elite performance. Aerobic conditioning is also vitally important in maintaining high-intensity efforts and recovery between matches.

To help us decide which type of conditioning training best suits the sport of wrestling, we must analyze the demands of the sport and what separates elite wrestlers from their non-elite counterparts.

Anaerobic qualities were assessed with the Wingate test which you will find a common thread throughout these studies. If you are unfamiliar with the test, you can check out this short video explanation and demonstration.

This test is often vomit-inducing it is that intense. The one demoing in this video looks like he may have been half arsing it.

An upper body Wingate test was also used and a shuttle run test to measure aerobic capacity (VO2max). Elite wrestlers had approximately 12% greater aerobic capacity than amateur wrestlers except for in the lightweight class where no difference was found.

Aerobic capacity and anaerobic performance variables were found to be very similar within elite Junior Iranian freestyle wrestlers with lower body average power ranging from 330-620 W and aerobic capacity ranging from 50-57 ml.kg–1min–1 on average in both studies [2].

For reference, elite endurance athletes can have aerobic capacities above 70 ml.kg–1min–1 [3], while senior elite level wrestlers can display power outputs of 836 W on average [4]. Some anomalies can crank out power outputs over 1000 W!

In fact, these junior elite wrestlers’ lower body power outputs even exceed the German 4000m pursuit World Record breakers in the 2000 Olympics again highlighting potentially how important it is to have the ability to generate power in the lower body [6].

One of the original studies looking at elite vs. non-elite USA developmental junior wrestlers found peak anaerobic power of the arms and legs relative to bodyweight were key factors distinguishing the level of wrestler while aerobic capacity was not [8].

But how do senior elite wrestlers compare with their non-elite counterparts?

Probably the best-performed study to date is this 2011 study where 92 wrestlers from 5 different countries based on their level and body weight were compared to predict wrestling performance [9]. Elite wrestlers had at least 6 years of experience and competed in at least 3 European and/or World Championships while amateur wrestlers had been a finalist at their National Championships.

The stark difference in anaerobic power is likely influenced by the 3-5% greater fat-free mass that the elite wrestlers possessed. Fat-free mass has been shown to correlate strongly with anaerobic peak and mean power during the Wingate test in wrestlers [10].

More recently, a review study of 71 research journals with a combined 2,124 wrestlers looked to decipher the main physiological characteristics of wrestlers [12]. They made the following observations:

Overall, a high level of aerobic development does seem to differentiate between elite wrestlers and non-elite wrestlers. But other factors may better predict wrestling success.

What the research clearly shows is the ability to display high levels of anaerobic power and capacity is indicative of elite wrestling performance. In order to improve this power output and capacity, high levels of fat-free mass and muscular strength and power are needed. 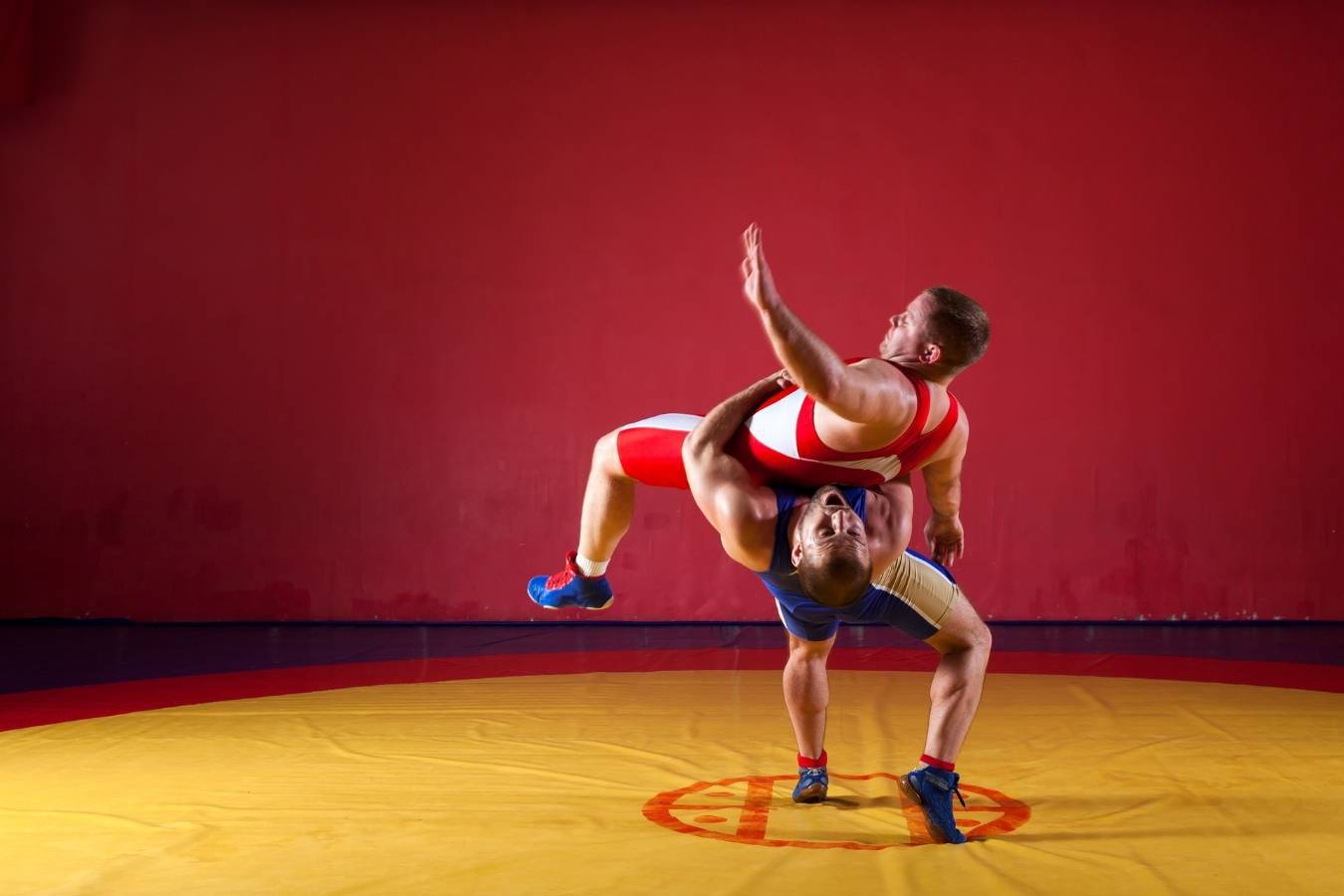 While the aerobic energy system doesn’t seem to differentiate between elite and non-elite wrestlers, a baseline level of aerobic development is needed to compete in a tournament format.

Not only to sustain high-intensity efforts but also aid in recovery between matches [12]. In a 2-day tournament simulation study of NCAA Division I wrestlers, blood lactate concentration after each of the 5 matches was extremely high (17-20 mmol.L-1) [11].

Indicating the high anaerobic demand for each individual match regardless of the incurred fatigue as the tournament progressed.

However, this study was performed before the rule change where matches were 2 x 5-minute rounds.

A more recent study found blood lactate concentration to only reach 8-13 mmol.L-1 [13]. Most notable was that while elite and amateur level wrestlers reach similar blood lactate levels post-match after the 2nd and 3rd match, elite wrestler’s blood lactate gradually increases throughout the match while amateurs have a spike.

Further, amateur wrestlers had higher blood lactate values after the first match. All of this indicates:

Activity Profile Of A Wrestling Match

Very little research has investigated the match demands of a wrestling match. In fact, one of the only studies is from 2002 looking at the 1998 Greco-Roman Wrestling World Championships [14]. The average work to rest ratio for all weight classes was 27-47 seconds of work to 7-20 seconds rest. Leading to an approximately 2.5:1 work-rest ratio.

The 85 kg weight class had work periods of 52+ seconds which was the highest of all weight classes. 28% of the matches went into sudden death while only 19% of matches ended early.

High blood lactate concentrations were recorded after matches averaging 15 mmol.L-1 which increased as the length of the matches increased.

The average length of all matches was approximately 7 minutes due to the majority of matches going full-length and many going to sudden death.

Match time combined with the aerobic capacity present in wrestlers indicates a need for a well-developed aerobic energy system with strong anaerobic power and capacity capabilities to make explosive maneuvers. 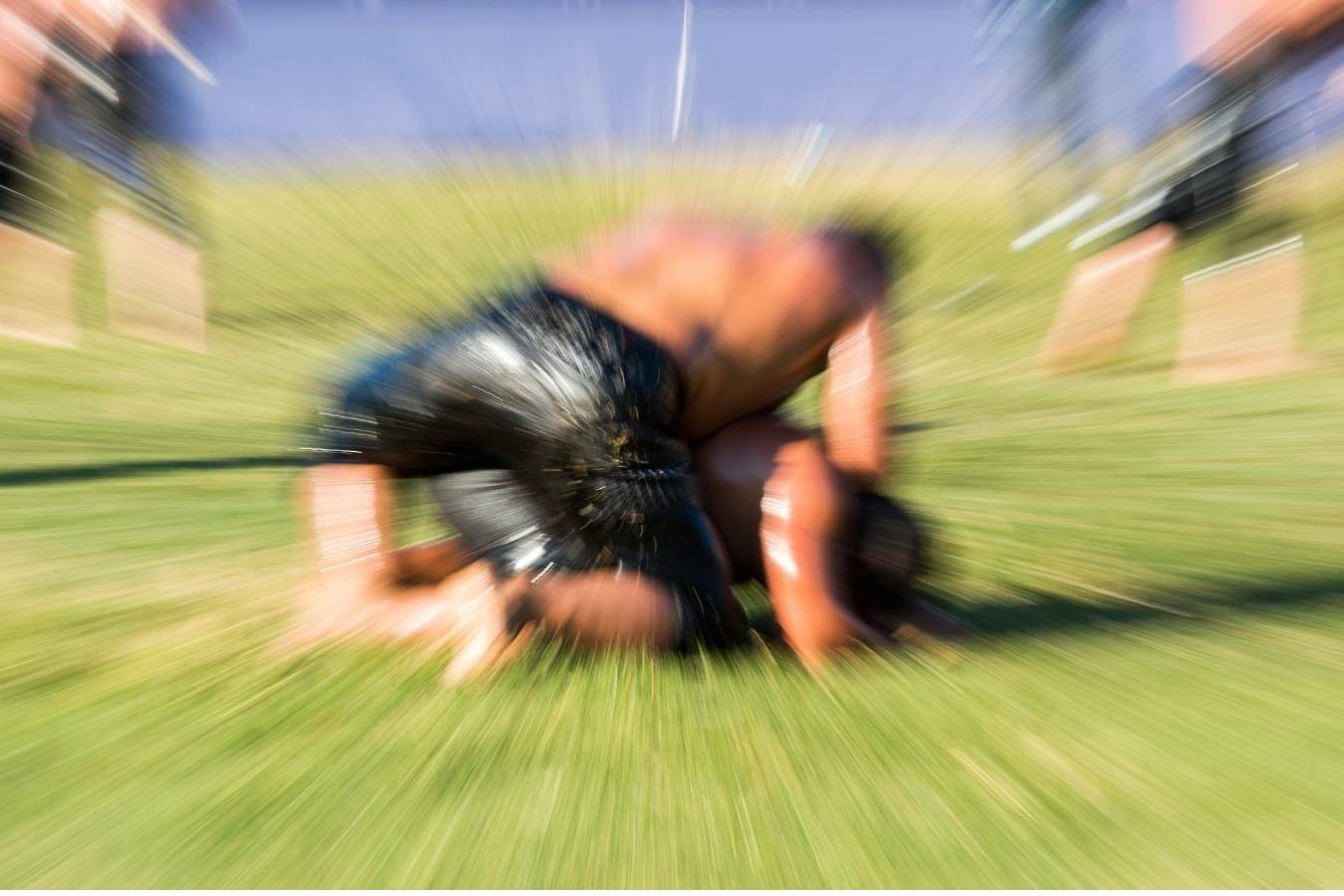 While aerobic training will focus on the usual central and peripheral adaptations in order to deliver more oxygen to the muscles and improve the ability to utilize it at the muscular level. However, we also want to train the ability to maintain a high quality of effort intermittently.

Building volume within the 130-150 BPM heart rate range is going to develop heart adaptations that will allow you to deliver more oxygen to the working muscles with each heartbeat. Use the Polar Heart Rate Monitor with a chest strap (check current price here) and not inaccurate wrist-worn fitness trackers.

Starting as low as 30 minutes and building to 60 minutes of continuous work should be the goal with this type of training.

This can be performed using off-feet cardio equipment such as rowers and bikes. However, using shadow wrestling drills such as sprawls, shots, and potentially partner-based alternating drills such as snap downs and arm drags into a takedown sequence can provide a great cardiovascular response while drilling wrestling techniques.

It could be as simple as choosing three or more different techniques and performing them in a continuous fashion for 5-10 minutes each.

You can also perform these using wrestling techniques. Ideally, these would be continuous double legs and other high-intensity takedowns. The idea is to maintain the highest heart rate possible throughout the entire work period in order to strengthen the contractile ability of the heart improving its ability to pump blood and maintain its strength at higher heart rates.

Intermittent aerobic work is a great way to maintain a high quality of movement and effort without the unnecessary fatigue that accompanies harder lactic-based training. The work-rest ratio of wrestling closely fits this type of training making it potentially a more “specific” aerobic training protocol.

Perform the work interval at around 70-75% effort or pace. You should be able to maintain the same effort and pace for every single rep during every single set. If you aren’t able to, then you are pushing too hard. If this is too challenging to maintain a steady pace, you can also start with 30sec/30sec and progress to 40sec/20sec.

Ideally, you want to stay with energy coming from mainly the aerobic energy system for as long as possible. But in sports like wrestling, it is inevitable that anaerobic processes will be taxed heavily. 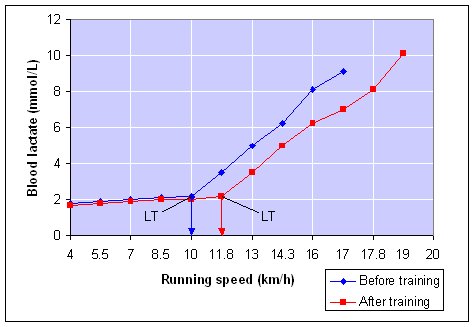 Joel Jamieson has invented a neat way to test your heart rate at lactate threshold in a field setting within MMA [16]. Using a heart rate monitor, spar for 3 x 5-minute rounds with 60-second breaks and take the average heart rate of the rounds only.

While wrestling isn’t fought over multiple 5-minute rounds, perhaps the same protocol could be used to find this measurement.

In my opinion, anaerobic power is likely best developed with increase fat-free body mass and overall strength and power.

Anaerobic capacity on the other hand can be trained with a few different variations. If you’re following similar guidelines to my program in the “Wrestling Strength Training” article, then the high-volume power training is likely enough alongside intense wrestling training.

Here are some other anaerobic capacity training options:

These intervals are best performed using wrestling techniques or even pure hard sparring. Drills can be manipulated such as always bringing fresh wrestlers in during the round.

You should be able to sustain the work intensity for all reps and rounds otherwise the work intervals are too intense. In fact, positive physiological adaptations to this kind of training have been found using sub-maximal intensities in endurance athletes so don’t worry too much if you think you aren’t working hard enough [15].

This is basically the high-volume power training I discussed in the strength training for wrestling article. However, this is done with lighter loads. Pick exercises such as kettlebell squat jumps, explosive push-ups, and split squat jumps and go to town.

This will be a very brief section as the explosive side of training will be performed mainly in the gym through the use of appropriate strength and power training. Maximum effort jumps, throws, sprints, and Olympic lifts will do the trick.

When putting your plan together, don’t perform all of these at the same time. There is no way you could and the mixed signals you send your body will dilute the adaptations you are after. Instead, you can phase your training like this (brackets indicate number of sessions a week):

This is a very crude example and the number of sessions and how long each phase will run will be dictated completely by your wrestling training and strength training.

12-Week Off-Season Wrestling Strength & Conditioning Program that will give you elite level strength & conditioning specifically for wrestling so you can dominate the mats. 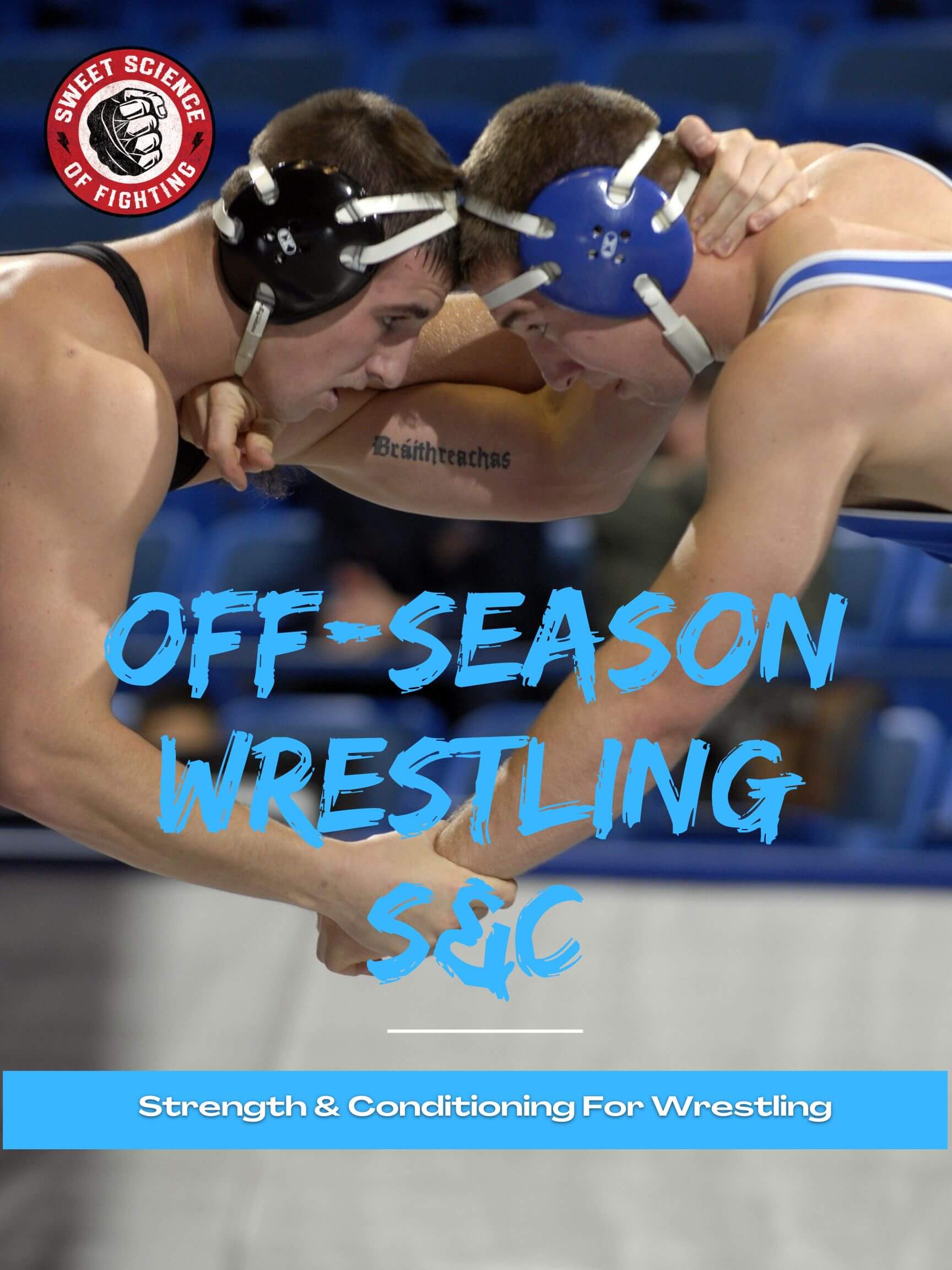 How Often Should You Train BJJ? Is Every Day Too Much?