Forget what you see on UFC Countdown. Flashing lights, battle ropes, and hard prowler circuits may look great for TV, but are less likely to get you in great MMA fighting shape. Conditioning needs to transfer to the sport of MMA.

MMA is a relatively new sport having only really started to grow in popularity since the first UFC event in 1993. Because of this, research is scarce when analyzing the sport of MMA. Much of the research dates back to the early 2010s which may not be as applicable to how MMA is fought currently.

However, by taking an objective overview of the latest research combined with earlier research, we can draw observations that may positively influence your training.

In order to know what it takes to become a top MMA fighter and to fight within a professional organization, we must understand what differentiates the elite and non-elite MMA fighters. 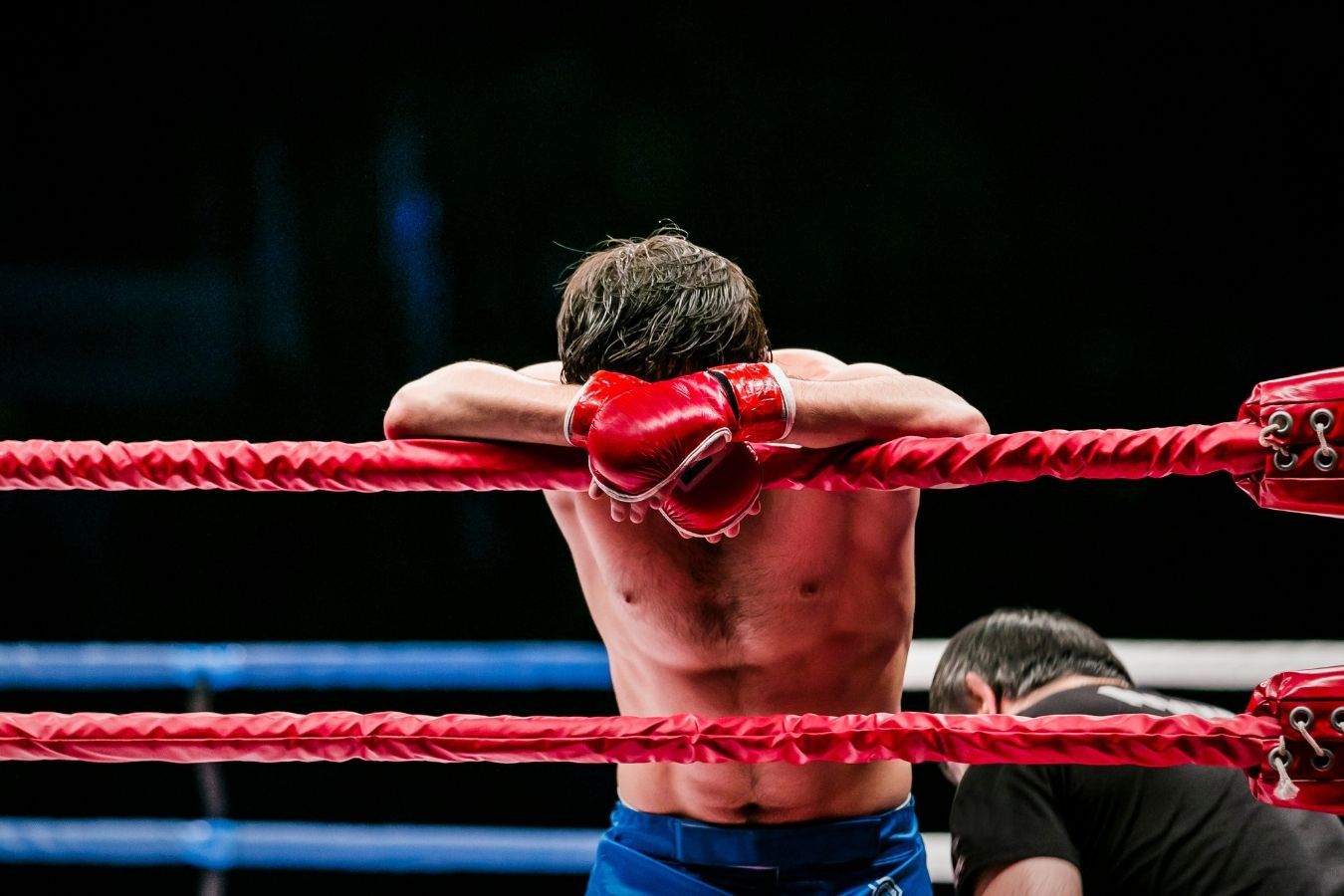 Regional Brazilian MMA athletes showed very poor VO2max values at 44 ml·kg-1·min-1 indicating generally poor aerobic conditioning in these athletes [1]. While regional and amateur MMA fighters in the USA showed VO2max values of 55 ml·kg-1·min-1 ranging between 50 and 60 in the welterweight division [2].

This seems to be on par with what the UFC PI indicates as the average VO2maxin their elite MMA population [3].

Another study in elite MMA (it was not mentioned what they considered elite) found 5 MMA athletes had VO2max values of 60 ml·kg-1·min-1 in the welterweight division but it wasn’t disclosed the individual values so it’s difficult to draw conclusions from such a small sample size [5].

Further, a case study on Top 2 Australian ranked MMA fighter observed a VO2max value of 56 ml·kg-1·min-1 in the middleweight division putting him within the 68% of the UFC population in that weight class [6].

These values are also similar to those found in elite amateur boxers indicating the importance of the aerobic energy system in MMA.

Research is far scarcer regarding anaerobic qualities in MMA. This means we will have to resort to single-athlete case studies.

Another case study investigated a Top 10 UFC Light Heavyweight who displayed similar lower body anaerobic power in relation to body weight of 10.4 W.kg with absolute anaerobic power topping out at a whopping 1075 W [7].

Only some wrestlers have been shown to display similar absolute power outputs [8]. Another case study with a UFC middleweight found upper body absolute anaerobic peak power to be 720 W which translated to 7.1 W.kg when made relative to body weight [9]. Anaerobic capacity was 630 W translating to 8.1 W.kg relative to body weight.

Unfortunately, we don’t have any data on non-elite MMA athletes to compare to. However, lower body anaerobic power and capacity in sports such as wrestling and boxing show similar values to our case studies listed above relative to body weight [10].

It is interesting to note that the Polish UFC middleweight showed extremely high upper body anaerobic capacity values of 8.1 W.kg which exceeds lower body values in almost all sports such as boxing, hockey, basketball, and soccer [10].

Perhaps this specific athlete has a strong wrestling background and has developed the ability to handle high power outputs for long durations.

Overall, the limited research suggests that MMA requires a very well-developed aerobic energy system to not only handle fighting 3 to 5, 5-minute rounds but to also facilitate recovery between rounds.

Activity Profile Of An MMA Bout 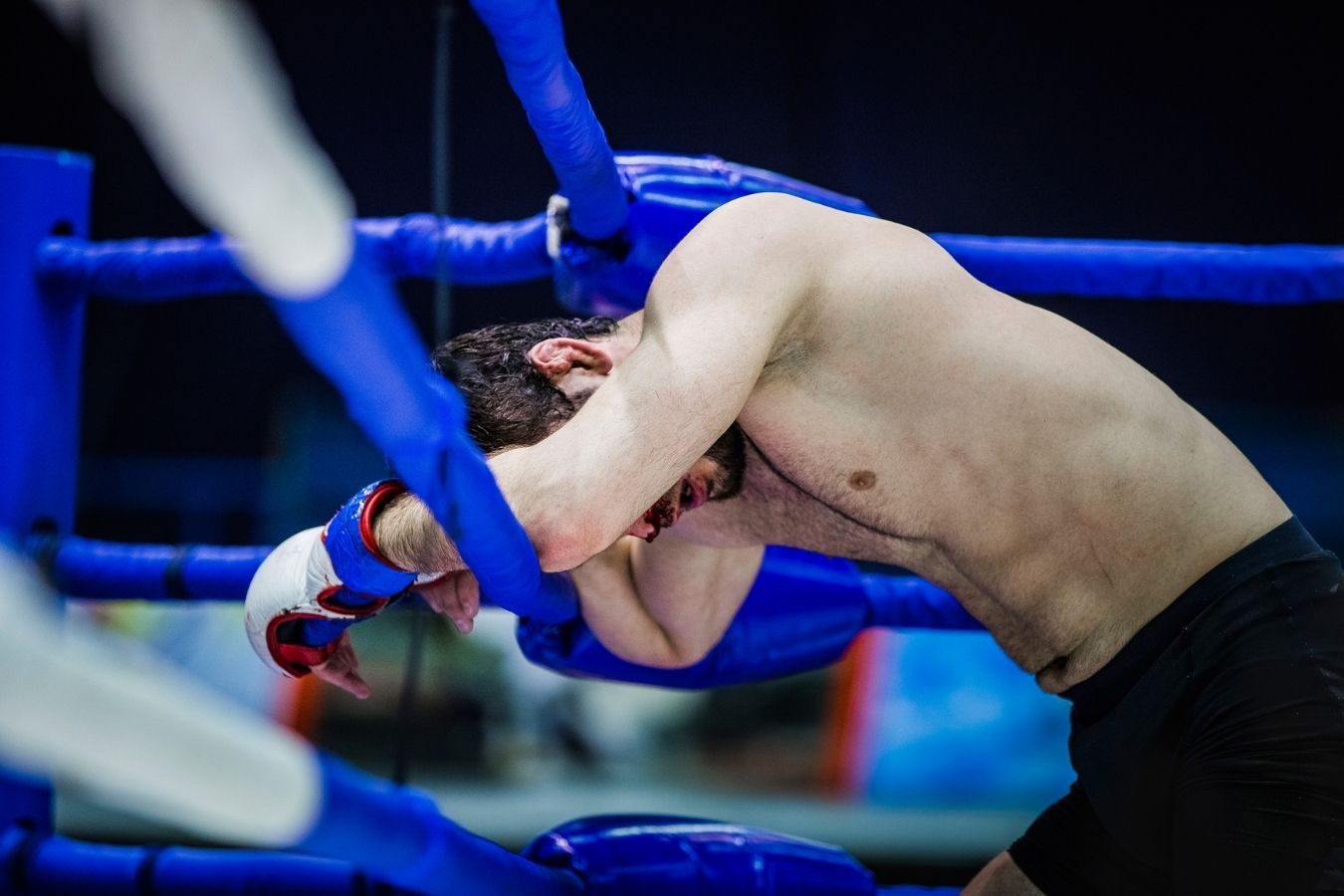 However, these findings don’t distinguish between weight classes which can show drastically different activity profiles.

A study analyzed 2097 UFC fights from 2012-2014 and separated the results by weight division [12]. Regardless of weight class, the work to rest ratio was found to be 1:3 which is in accordance with previous findings.

It seems in the 4th round, activity drops dramatically [14]. The 4th round seems to be the most advantageous for grapplers due to the pacing strategy to last for the 5th round and the fatigue generated from the previous rounds may allow a fighter to control an opponent with low-intensity grappling.

Further, the 4th round seems to have 1/3 less striking frequency and longer periods of low-intensity action with more grappling action.

However, the 5th round sees a 50% increase in strikes compared to the 4th round to levels similar seen in the 3rd round.

We can sum these findings up to suggest that a 1:2 to 1:4 work to rest ratio is valid regardless of the level of competition.

What Influences Success In MMA Bouts? 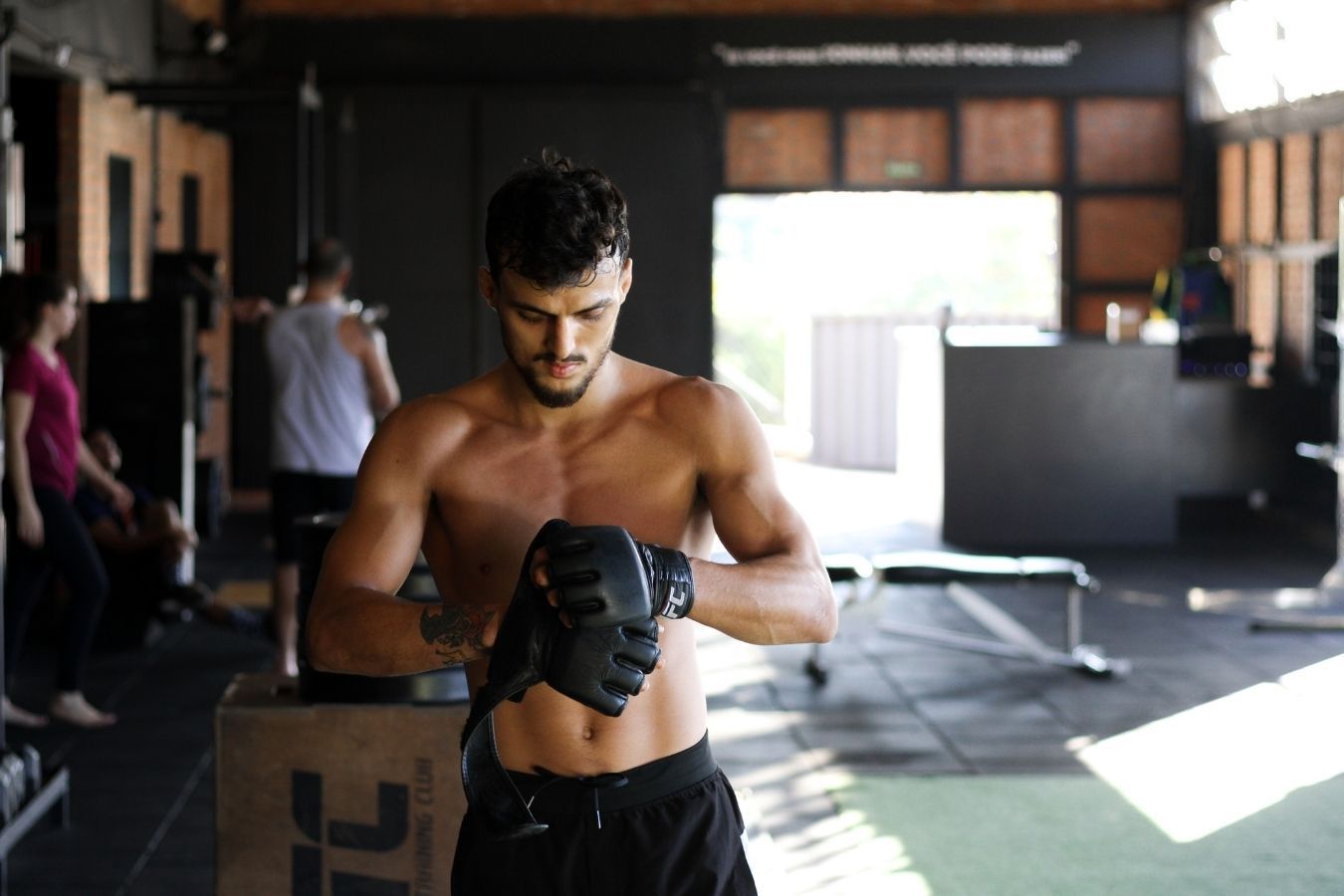 351 UFC fights were analyzed from 2014 to ascertain what technical components influence a winning performance [15]. They found winners were able to increase activity from round to round whereas losers decreased activity.

Winners spend the first round ‘reacting’ to an opponent and ‘feeling them out’ and then transition into an ‘anticipatory’ mode where they are better able to read their opponent. In contrast, losers reduce their key actions after the first round.

Winners are better able to anticipate their opponent’s attacks making developing technical skill and agility important qualities. On the ground, winners had greater submission attempts, advances to half guard, side control, back, and mount position than losers.

We know that MMA requires a high level of aerobic conditioning. We also understand the importance of the anaerobic lactic and alactic energy systems for fuelling very high-intensity actions.

In fact, 77% of all UFC fights are ended in the 8-14 second high-intensity work period.

So an MMA fighter must be explosive, fast, and have a gas tank to utilize their skillset throughout the entire 5-minute rounds.

Similar to other combat sports, we want to improve the ability to deliver oxygen to the working muscles and utilize that oxygen to remain as aerobic as possible.

The aerobic energy system should be emphasized to the greatest degree during training. The Polish UFC middleweight in the study referenced earlier adheres to this principle which I believe to be very important [10].

In his 11 week build-up, he spend 7 of them performing 70-87% of his conditioning workload as aerobic exercise. A further 6-20% was spent aerobically but flirting with the anaerobic lactic zone. That left approximately 10% of training time dedicated to anaerobic lactic and alactic conditioning.

It wasn’t until week 11 where aerobic conditioning dropped to 30%, flirting with the anaerobic lactic zone increased to 43%, and anaerobic lactic and alactic training consisted of 15% each.

If you’ve read my “What Is Conditioning Training” article, you may notice a trend regarding the focus of aerobic development. A similar model was used by the German 4000m Team Pursuit cycling team who broke the world record at the 2000 Olympics [16].

Their event lasts 4 minutes of maximum intensity riding yet spend 94% of their training preparation training low-intensity aerobic conditioning. Only during the last 8 days before the Olympic event did they start to incorporate high-intensity, anaerobic lactic conditioning.

I believe a similar model to the UFC Polish middleweight should be followed when it comes to MMA conditioning. I like to refer to it as the funnel system.

The goal here is to provide a stimulus to the heart to dilate the inner walls of the heart chamber to allow more blood to be pooled between each heartbeat. In order to do that, your heart rate should sit between 130-150 BPM when performing standing exercise.

If on the ground, you can take off approximately 10 BPM from either side. You will need a heart rate monitor to perform these sessions correctly and I highly recommend the Polar H10 like I do in all of my articles (link to Amazon).

I have the older version and it works great. These are the most accurate heart rate monitors you can get. Don’t bother with a wrist-worn fitness tracker.

Due to the vast amount of skills you need to train, most, if not all conditioning should be performed using MMA specific movements. That means creating a circuit of techniques that you can repeat in a cyclical fashion for 30-60 minutes.

This will also ensure the greatest transfer to your fight while allowing you to hone your technical skills.

Example exercises can be shadowboxing and shadow wrestling. Mix skipping and medicine ball throws in-between some exercises if you are training on your own and you have a solid plan.

These can also be performed using MMA techniques. Mainly heavy bag work and intense takedown sequences. You want to maintain your heart rate as high as possible throughout the working period.

This improves the strength of the heart where it can pump more blood, and therefore deliver more oxygen to the working muscles per heartbeat.

Due to the intermittent nature of MMA, lower level aerobic exercise can be performed in an intermittent fashion to maintain a high quality of movement while keeping fatigue low. Don’t confuse this with high-intensity interval training (HIIT) that you may see at your local gym class.

The goal is to maintain the same pace throughout the whole training session at around 70-75% of maximal effort. It’s about quality when taking a tempo training approach.

Specific anaerobic capacity training is likely to be minimal with the vast amount of training being performed. Especially with up to three sessions a day. Most of the anaerobic lactic development will occur through MMA training itself especially as training camp comes to an end.

Increases in the intensity of striking and grappling specific sessions as well as sparring means addressing this energy system with extra work may not be necessary. Focus may be better spent on pushing the boundaries with alactic capacity training.

The average work to rest ratio of MMA lines up near perfectly with alactic capacity intervals. These can be performed by throwing striking combinations on a bag, performing continuous takedowns, or through explosive push-ups and jumps. The former should be the first choice.

Perform these in the same work to rest ratio as is seen in MMA of 1:2 to 1:4. You can even perform these intervals for exactly 3 x 5-minute rounds to replicate the duration of the fight which will definitely be brutal.

Alactic power will mainly be developed during strength and power gym sessions. Overall, spend most of your time developing the aerobic energy system and intensify your conditioning as you get closer to your MMA fight. 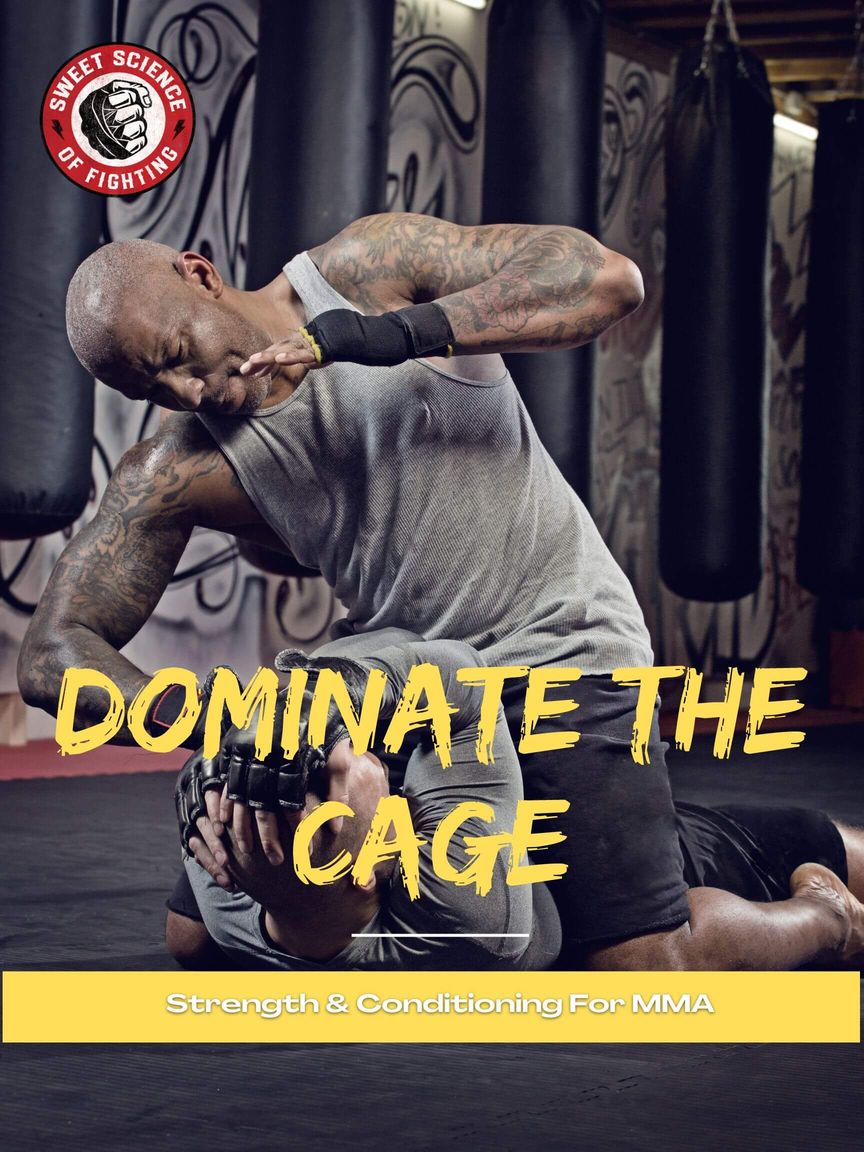 6. Lovell, D. I., Bousson, M., & McLellan, C. (2013). The use of performance tests for the physiological monitoring of training in combat sports: A case study of a world ranked mixed martial arts fighter. J Athl Enhancement, 2(1), 2-6.