Boxing is often called "The Sweet Science" because, for true success in boxing, one needs indomitable will and toughness, but also thoughtfulness, strategy, and forward-thinking. As one of the oldest sports globally, boxing has an incredible complexity in both physical and mental aspects.

But before you reach the depths of true pugilism, you first need to understand and master the basic principles and techniques. Allowing you to hit and avoid getting hit.

You need to learn how to throw punches effectively, transferring the power from the whole body into the strikes. You also need to know how to defend against the opponent's attacks, maintain a boxing stance, and how to move around the ring quickly and efficiently.

This guide will take a look at all of the above, and even though it's meant as a boxing for beginners tutorial, you can be sure that if you grasp and learn to perform the basic boxing stance, footwork, punches, and defenses, you will be well on your way to be an advanced boxer.

Can You Teach Yourself Boxing? 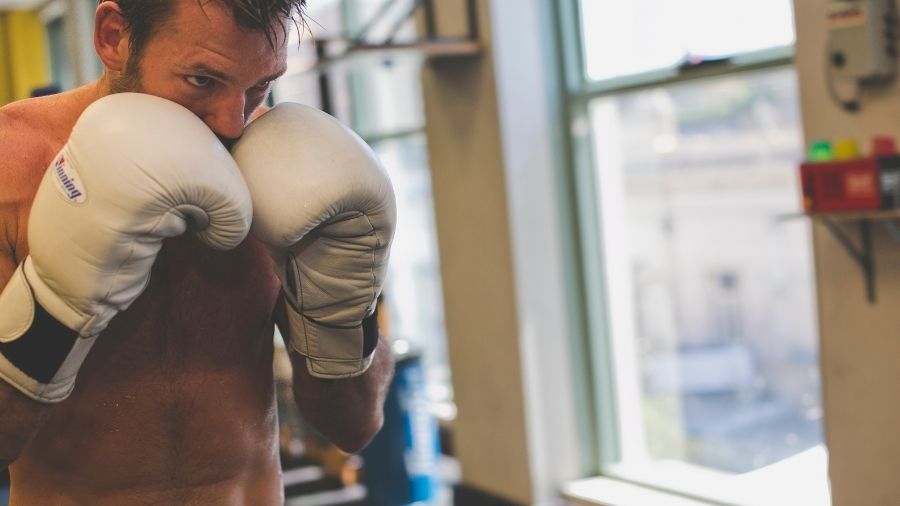 Although ultimately boxing is about fighting another person, you will spend most of the time practicing doing solo drills, even more so when you are a beginner. Before starting sparring, you need to be competent with all the basics.

A coach that is watching and correcting you is invaluable. However, you can still make serious progress in the technical aspect on your own. We have a whole series of boxing guides. There are thousands of hours of instructions around the internet, so if you dedicate the time and practice diligently, you can get pretty good with boxing fundamentals on your own.

Partner drills and experience against opponents cannot be replaced by anything. Still, you may hone your skills at home very effectively. So let’s begin our guide on the basic techniques you need as a beginner boxing student.

Although there are many variations of the boxing stance for different boxing styles, all beginners should start with the most fundamentally correct one.

The proper boxing stance balances the different essential attributes required for fighting. A good stance ensures you can throw with power and defend strong punches. It allows you to hold your ground with stability and balance and lets you move quickly when needed. And all of this should be accessible to you in the shortest amount of time with no preparation.

The two main stances are orthodox and southpaw. Orthodox is the predominant stance as most people are right-handed, while left-handed people use southpaw.

The difference between the two is only which foot and hand are forward. There are many other minor variations like the exact position of the hands, the width of the feet, and more. Still, as a beginner, you already have your hands full without concerning yourself with advanced stuff.

The footwork is the thing that ties all the other elements together. Without it, nothing in boxing works. You may have a thunderous overhand on the heavy bag, but if you can't move into position to land, it's meaningless.

Technically sound footwork lets you quickly move in and out of range, maintain balance in unfavorable positions, and allows you to generate the power of the entire body and transfer in the punches. Like everything else in boxing, the topic of footwork is profound, but we will touch on just what you need as a beginner.

In general, you need to be able to move forward, back, laterally, diagonally, and pivot. There are a few things that you must always adhere to regarding proper boxing footwork:

Moving in a boxing stance is not the same as regular walking. Here is a quick instruction on how to move:

As a rule, you should always lead the movement with the leg going in that direction. Left foot first when advancing or left and right foot when going backward (for a southpaw, it's the opposite).

You may break some of these rules during specific movements and techniques. You may see many boxers doing all kinds of crazy stuff. Still, it's essential to build a strong foundation before you start experimenting as a beginner.

Footwork is fundamental, and you have undoubtedly heard the famous quote from Muhammad Ali "float like a butterfly, sting like a bee," which is precisely what every boxer should aim for smooth movement and deadly precision.

In boxing, the only weapon allowed is punches, and there are three main types- straights, hooks, and uppercuts. Many variations, hybrids, small details, and subtleties may differentiate them, but first, let's go over the basic punches. You can take a deeper dive into each punch with our detailed guides. 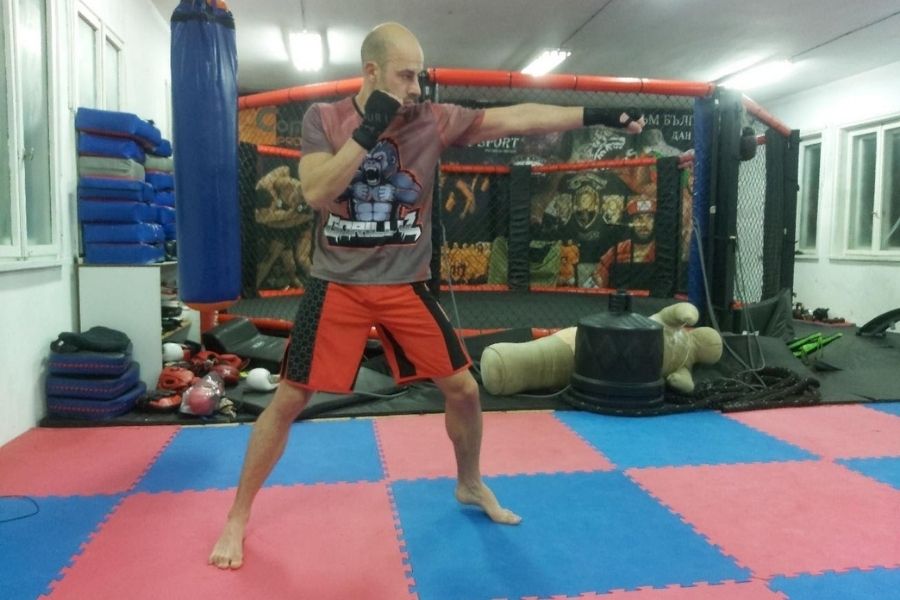 The jab is a straight punch with the lead hand. Read “How To Throw A Jab” for a detailed breakdown. 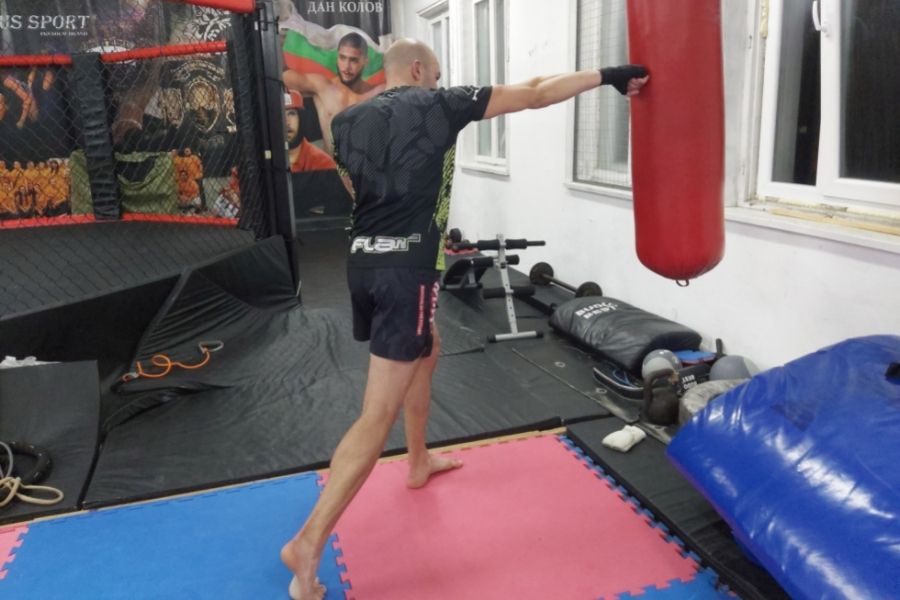 A cross is a straight punch with the rear hand. Read “How To Throw A Cross” for a detailed breakdown. 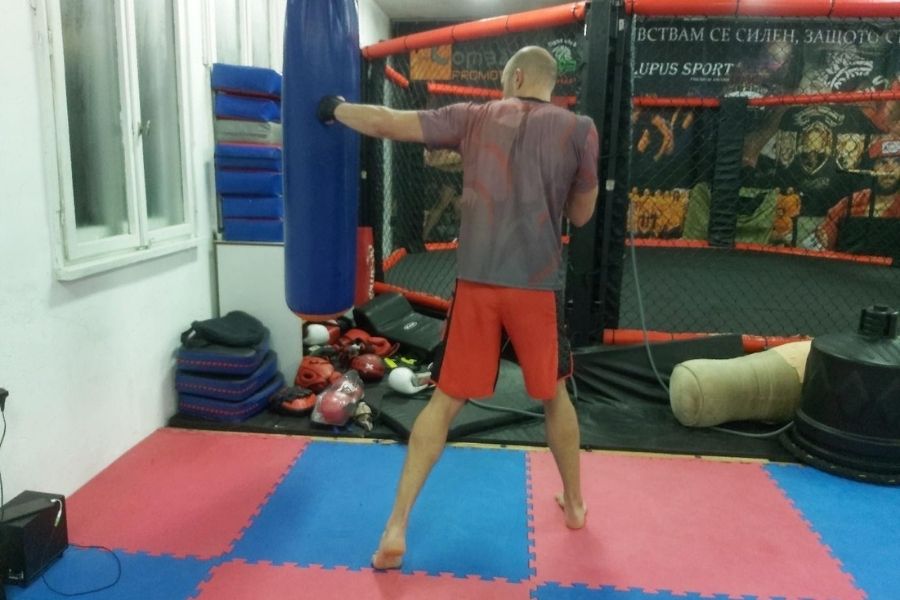 A hook is a punch done in a horizontal arc with the arm bent at around 90°. A lead and rear hook are aimed mainly at the chin, but it's also used to the body. Read “How To Throw A Hook” for a detailed breakdown. 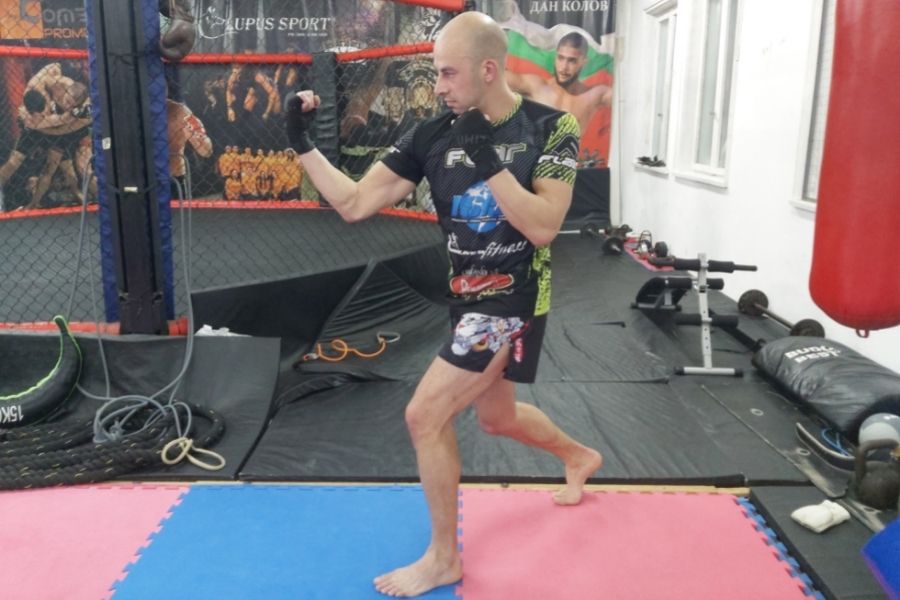 The uppercut travels upwards with the arm bent close to 90 degrees. Like hooks, there is a lead uppercut and rear upper depending on the punching hand. Read “How To Throw An Uppercut” for a detailed breakdown.

While we don't argue that the best defense is offense, actual defense is the next best thing. The purpose in boxing is to hit and not get hit, and to do that successfully; you need to build a sturdy defense. There are three main types of defense- blocking, parrying, and slipping. 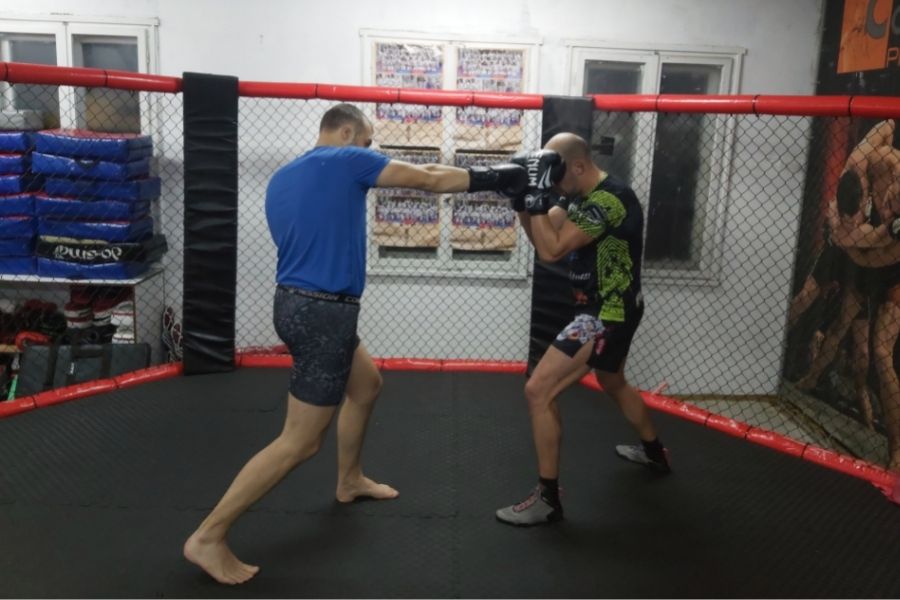 The easiest way of defending a strike is blocking it. This means you use your hands, forearms, elbows, or shoulders to stop a strike aimed at the vulnerable parts of your head or body.

Blocking is most straightforward because if your hands are where they should be, you only need to make a small movement to protect the head.

It also requires the least amount of energy and skill to do. The downside is that there is still impact going through the block, and you still take some damage even if you block successfully. Read “How To Block A Punch” for a detailed breakdown.

The parry is the next step from blocking. Parrying or catching the punches is done against straight attacks, and it's done by using the palm of your glove to deflect the attack in another direction. The parry uses the opponent's momentum against him, leading to beautiful counter-attacks.

The more power and commitment the attacker puts in the punch, the better the party will be. Unlike blocking, where you receive some damage, the parry deflects the attack entirely. 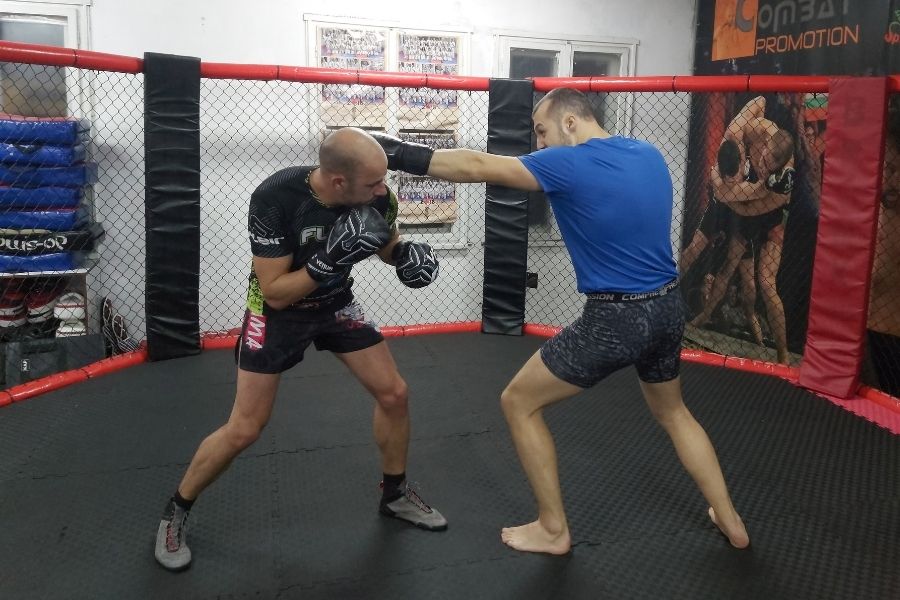 Ideally, the best defense is making your opponent miss altogether. This is done by slipping straight shots and rolling and ducking under hooks and overhands. The slip is a move that involves transferring your weight to one foot and moving your upper body and head slightly to the outside of an incoming punch.

Rolling and ducking put you under the incoming punches. When rolling under hooks, always move in the direction where the punch is coming from. When the move is finished, you are on the outside of your opponent at an advantageous angle for you.

Avoiding the punches altogether is your best defensive option, but it's also the hardest to execute. A successful slip can lead to a very powerful counter-attack. Making the opponent miss is the best way to tire and demoralize him.

Read “How To Slip A Punch” for a detailed breakdown. 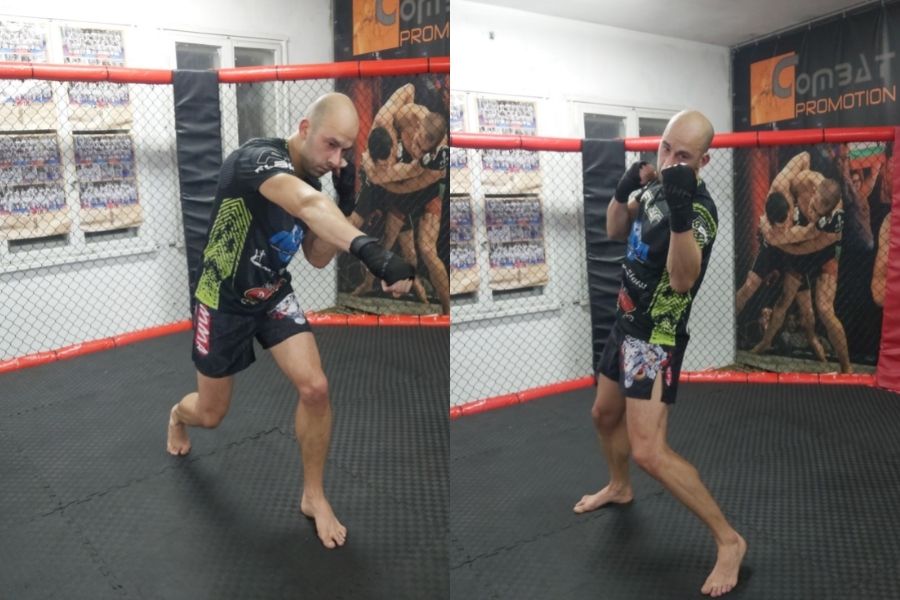 Throwing punches in combinations drastically increases the chance of some of them landing. Reacting to one punch is much easier than reacting to a series of 3 punches. The main idea of a combination is that each shot must set up the next one while confusing the opponent as to what punch is coming next.

A good rule for beginners is to remember to always alternate between hands for each punch. Same side combinations are good, but as a beginner, you should avoid them for now. Here are four bread and butter combos that are perfect for beginner boxing workouts but are still heavily used by all professionals as well.

This is THE boxing combination. A jab followed by a cross. This is the first combo you learn as a boxer, and at the same time, world titles have been won on the back of it. Drill this to perfection.

Adding the left hook to the jab-cross makes the combination more unpredictable. The straight shots bring the guard upfront, which leaves the side of the head open for the hook.

A bit more advanced 3-piece combo. The right uppercut is a powerful punch that either lifts the head if it lands or lifts the guard and leaves the vulnerable liver open for a strong left hook.

How Can You Practice Boxing At Home? 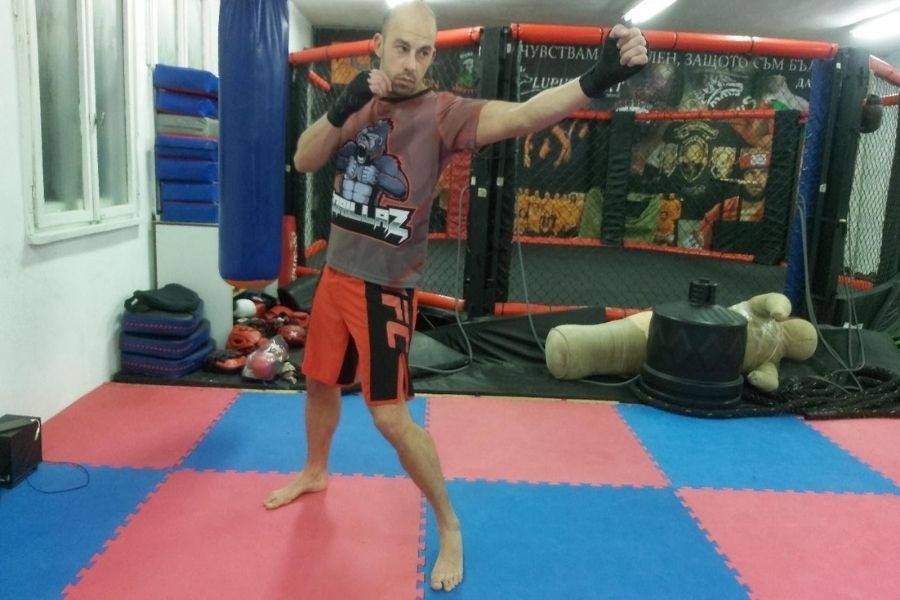 You can train all of the techniques we've explained by this point at home. You just need some open space. Start with the proper stance, then move to footwork. Start by throwing punches slowly and with the correct technique. When you get more confident with the technique, start building some speed and power. Then combine the footwork and punches together.

When you have these down, you will start shadowboxing. This is probably the single most valuable practice method you can master and will serve you faithfully throughout your entire boxing journey.

The most important thing we can advise about shadowboxing is working on something specific while constantly doing it. Don't just swing your hands in the air to build up your heart rate. Always know what you are trying to improve while shadowboxing and visualize an opponent when doing it.

The other important part of training at home is analysis. If you have a mirror you can train in front, use it often. If not, you likely have a phone with a camera. Take videos of yourself and analyze them continually, then improve what needs improving.

If you have the space for a heavy bag and a reflex or cobra bag, then you are settled. You can do everything at home everything aside from partner drills and sparring. Of course, training at a gym is by far the best option, but you can cover a lot of work and improve immensely many aspects of your boxing game from the comfort of your home.

Boxing's ruleset is relatively simple. Only punches are allowed. But just because something is simple, it doesn't mean it's easy. As a beginner, this should not stop you. As hard as it is, boxing can be one of the most rewarding things you do in your life.

And the best part is that you can start building your foundation from home. This boxing for beginners guide, combined with our more detailed instructionals on different fundamental techniques, has all the info you need to get you started in boxing.

Is Karate Good For Self-Defense?

Is Kickboxing Good For Self-Defense?

Why Do Boxers Put Their Hands In Rice?

Is Taekwondo An Effective Martial Art?