When To Stop Training Before A Fight

One of the worst things a fighter can do is to continue to train ‘hard’ as they get closer to the fight. It works well and looks great in the movies, but you don’t recover in real life like they do in the movies!

A fighter should never ‘stop’ training before a fight. They should instead decrease their training volume 14 days out by approximately 40-50% and 7 days out, decrease training volume by 70-80% of a normal training week. This is known as a taper.

If you’re not sure what a taper is, you’ve likely performed your own taper before a fight without even realizing it.

What Is A Taper?

A taper is a reduction in training load over a period of time with the aim to reduce the physiological and psychological stress of daily training and optimize sports performance [1,2].

This reduction in training load can be manipulated by either reducing training:

There are four distinctions between tapering protocols: 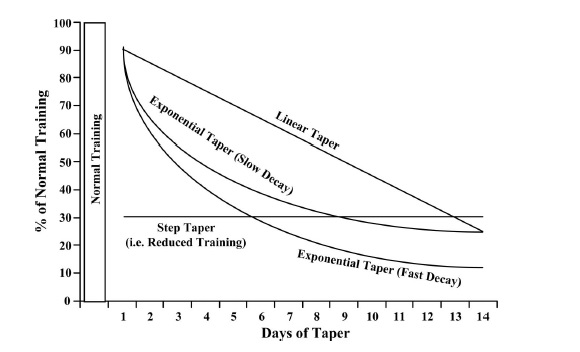 It’s much easier to categorize them into two categories. A progressive taper which encompasses the first three, and a step taper.

Based on the vast majority of tapering research, it seems the faster the reduction in training load, the better the performance at the end of the taper. Presumably, the fast reduction allows more time to overcome the fatigue from the previous training.

Why Is Tapering Before A Fight Important?

The quick and dirty answer to this question is the adage quote “fatigue masks fitness.” Meaning you can’t realize the full potential of your training unless you have fully recovered from it.

To gain a deeper understanding, we need to know how a taper affects the body. We need to understand the adaptations imposed by reducing the training load.

* = significant change. Some numbers have been rounded for easier viewing.

The T:C ratio is a hormonal stress marker which is influenced by individual fitness level, and the duration, intensity, and type of exercise.

Out of the research presented in the table above, the only study to show a significant improvement in T:C ratio was by Hortobagyi and colleagues [3]. They were the only ones to take complete rest from training for two weeks.

Complete rest may trigger a response to increase T:C to preserve muscle mass which starts to deteriorate from detraining.

By continuing to train throughout the taper as per the rest of the studies, this anti-catabolic response may not have been needed.

As we know, the lead-up to a fight is a stressful event. Uddin and colleagues found that while cortisol did decrease throughout the taper, the final two days leading up to the fight saw a spike in cortisol which is an indication of the common stress response fighters have before fights [9].

It seems that T:C may not be an important marker to measure the response to a taper especially since complete rest likely has a greater negative effect than training when preparing for a fight.

* = significant change. Some numbers have been rounded for easier viewing.

Creatine kinase (CK) is also a stress marker that is tightly connected with muscle damage. The discrepancy in CK reductions from a taper doesn’t come down to the type or duration of the taper, but of the pre taper training or sport.

As CK is associated with muscle trauma, sports such as MMA, rugby, and American Football benefit greatly from a taper period due to the muscle trauma involved in contact and collision sports.

Sprinting and jumping are the most common performance variables measured when tapering. The ease of testing and the fact most sports require explosive power makes them good general tests.

Simply, reducing the training volume allowed fatigue to dissipate and improve the expression of power in jumping and sprinting tasks.

My study (de Lacey and colleagues) showed a very large increase in jump heights compared to the other studies [12].

This is likely because we reduced training volume to a significant degree with a 75% decrease in volume for three weeks while maintaining training intensity.

These studies highlight the importance of training throughout a taper. The two studies that showed a decrease in strength stopped training completely while training during the taper improved or maintained strength.

Performing too much endurance training during a taper as Garcia-Pallares and colleagues did can lead to strength loss even if regular strength training is performed during the taper.

The study by Lovell and colleagues is difficult to interpret as it was a case study of one fighter leading up to a competitive fight. That means testing was performed a couple of weeks after the fight so it’s difficult to take these results as changes from the training camp taper.

However, the research in Taekwondo seems promising with large improvements in kicking response and kicking movement time from a short 7-day taper compared to the group maintaining their training volume [14].

Further, National level Taekwondo athletes who reduced training volume by 60% in the first week and 40% in the second week found that anaerobic power and capacity improved after the taper whereas the group that didn’t taper did not [15].

How Far Out From A Fight Should You Start A Taper?

Performing it in a linear fashion means training load can be decreased even further come the final week of preparation.

In my opinion, a 14-day taper would be optimal for a fighter as removing exercise that causes high levels of muscle trauma such as sparring while maintaining a speed and power will have a fighter feeling fresh come the end of the 14 days.

How Should You Implement A Taper Leading Into A Fight?

Most of the tapering research has focused on purely endurance or strength sports. Likely because it is easy to measure the reductions in training load. For example, instead of running 100 km in a week at a certain pace, run 50 km in a week at the same pacing strategy.

More recent research has implemented tapering protocols in team sports such as rugby league and American Football as well as in MMA as shown in the tables above.

In the martial arts, it is more difficult to quantify a reduction in training load. However, endurance and strength sports can provide a much-needed guideline for best tapering practices.

It has been suggested that a 41-60% reduction in training volume over two weeks is the optimal tapering protocol [16]. The research presented in the tables above tends to confirm that.

It’s important to note that reducing the training load runs a risk of detraining. This is often the fear the leads athletes to starting their taper too close to a fight.

The most important part of a taper when decreasing training volume is to keep intensity high.

Intensity protects against the detraining effect from the reduction in training load. Intensity doesn’t mean hard, grueling sessions of sparring and CrossFit circuits.

It means high outputs such as maximally thrown combinations with plenty of rest or lifting weights with a heavy load or performing various jumps all with little volume of work.

High-intensity actions are also the first to detrain when they are not addressed. This is shown in Vladimir Issurin’s “Block Periodization: Breakthrough In Sports Training” book (link to Amazon). It is called the Residual Training Effect.

As you can see from the training residual table, the speed of movement detrains very quickly if it is not addressed. That means during a taper, a focus should be placed on maximal speed striking, takedowns, throws, jumps, and gym power work.

As you can see from the training residual table, the speed of movement detrains very quickly if it is not addressed. That means during a taper, a focus should be placed on maximal speed striking, takedowns, throws, jumps, and gym power work.

This will retain the most important qualities needed for finishing fights. Aerobic training and maximal strength don’t need to be trained as these qualities are retained for long periods of time. Aerobic training instead can be an active recovery modality instead.

The taper for a fighter has an added element of difficulty. The weight cut.

Being aware of how a fighter’s emotional state can deteriorate coming to the end of a training camp and how quickly bodyweight is lost can help with planning the type of training and to schedule the reduction in training volume.

Approximately 5% of body weight is generally lost in the final 4 days leading up to a fight with the tension of a fighter increasing and mood decreasing in the 5 weeks build-up before that [9].

The training residual effect can be a great guideline, but with fighters rapidly losing bodyweight, the ability to maintain high levels of strength and power becomes even more important.

Here is an example taper assuming a 14-16 hour training week in the build-up [9].

Remember, the lactic conditioning sessions can, and should be performed purely from fight drills. This also gives extra time performing the sport and providing specific conditioning adaptations.

2. Mujika, I. (2010). Intense training: the key to optimal performance before and during the taper. Scandinavian journal of medicine & science in sports, 20, 24-31.

Which Martial Art Should You Learn?

Can You Combine Bodybuilding And Martial Arts?

Savate vs. Taekwondo: Who Would Win?

Detraining: When Does Not Training Become Detrimental?

Sambo vs. Wrestling: What’s The Difference?

Why Tabata Is NOT Good For Fighters