The most versatile piece of gym equipment is the landmine and its accompanying attachments. Personally, I program landmine exercise variations with all of my athletes that are struggling with shoulder or back problems.

The landmine allows for free movement without being fixed into a movement which can often cause pain.

Pressing variations with the landmine finish with the arms in front instead of completely overhead reducing pain for those with shoulder impingements or other issues that can be common among martial artists.

Not all landmine attachments are made equally. Some are worth their weight in salt and others are just making your wallet lighter.

So, I’m going to show you exactly which landmine attachments are worth your money for your own training.

First, you are going to need a piece of equipment to create your landmine known as the landmine base. Here are your three options:

My Top Landmine Base Pick 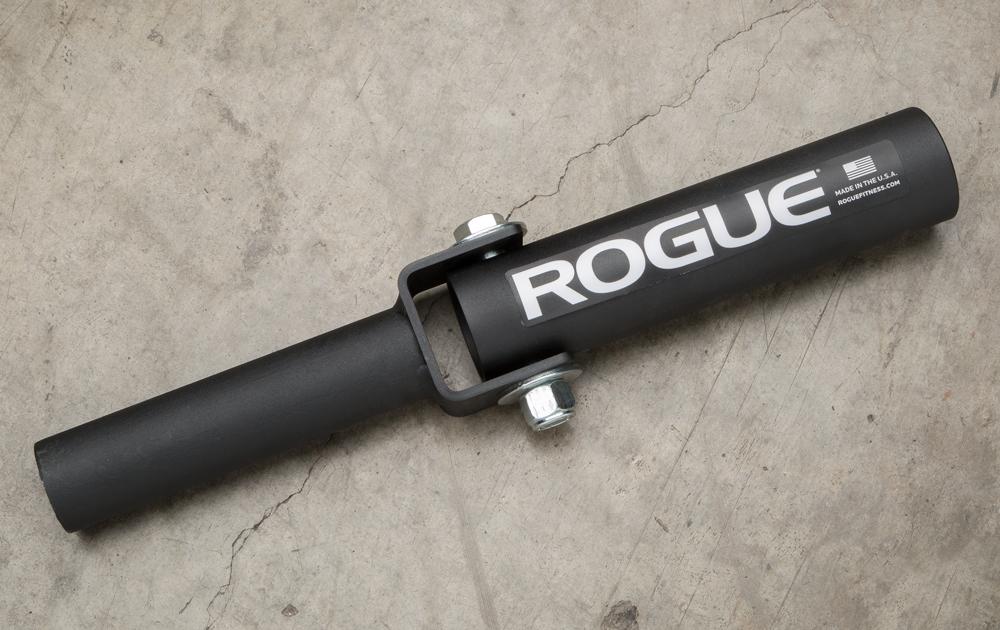 The Rogue Portable Landmine Base is my favorite landmine base that I’ve used extensively. It’s the easiest to set up. Simply stack a bumper plate or two and place the attachment through the plates.

The plates act as the landmine base. It may seem like an unstable base, but I’ve had athletes perform various twists and presses using this exact attachment with no problems. Often even one bumper plate is enough to hold the Rogue Portable Landmine Base.

This is the only landmine base that really is portable. It only weighs 9lbs and could easily fit in your gym bag. It

It’s important to note that when using this base, not to leave an unloaded barbell inside the landmine sleeve. When resting the barbell on the ground, the landmine base and barbell rest against the plates and lift the opposite end.

This may place undue stress on the inside of your bumper platers.

My Landmine Base Runner Up 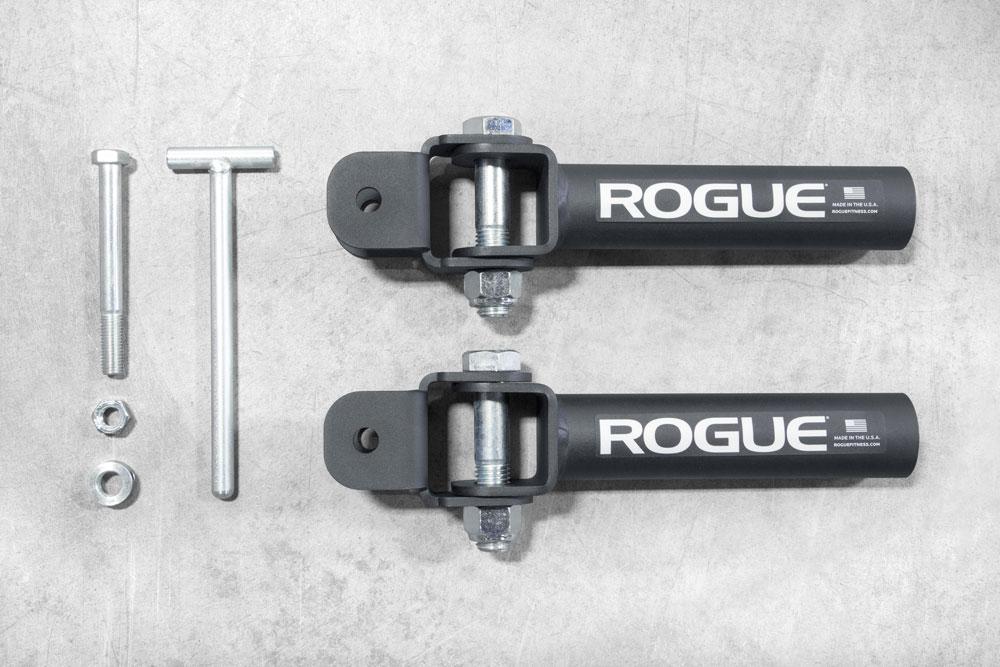 The Rogue Landmine Rack Attachment can be bolted directly to your power rack. This makes this particular landmine attachment the sturdiest out of the three as it won’t detach or move.

The only issue with this Rogue Landmine Rack Attachment is that because it is fixed to your power rack, you need to have the space around your power rack to use it. Those with smaller gyms may not have that luxury. 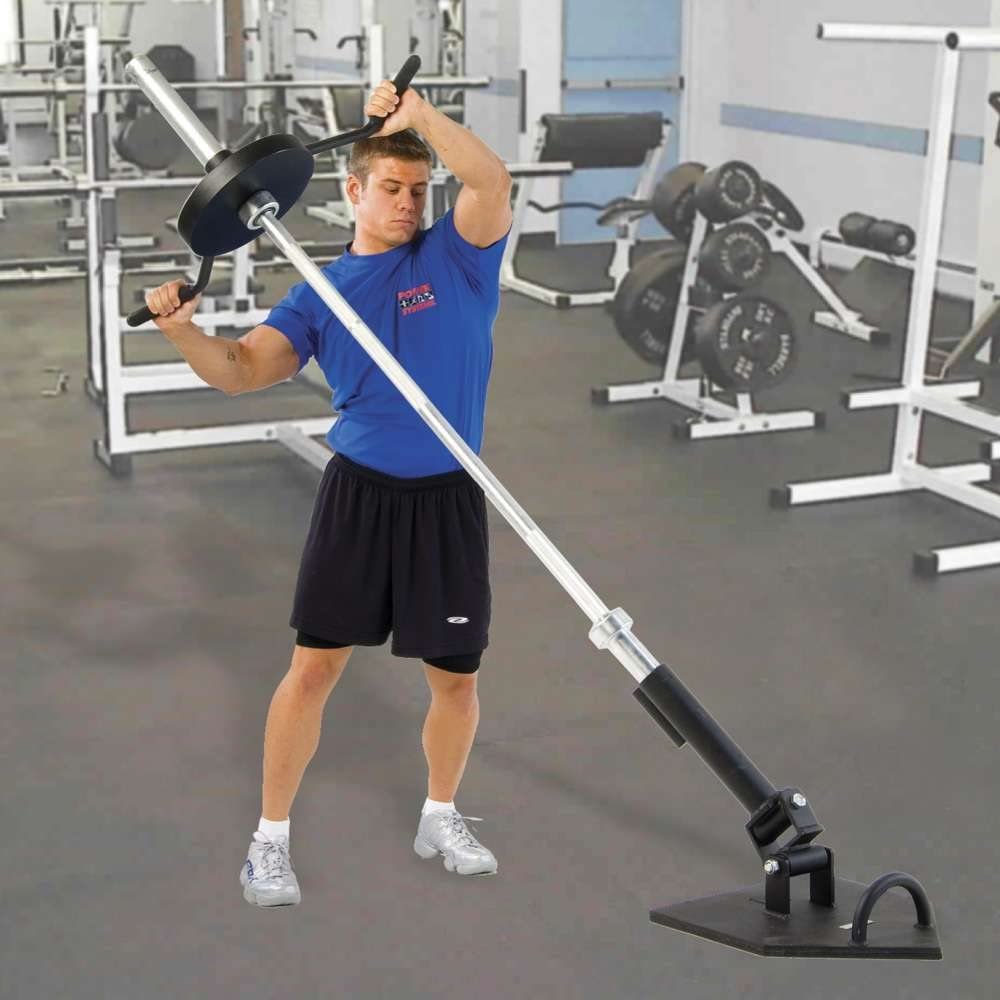 I’ve included this third option as a landmine base called a landmine platform. It is the more expensive option and, in my opinion, is more of a nuisance to use than anything compared to the other landmine bases.

The Power Systems Landmine Training Station is a heavy base that doesn’t need to be attached to anything or use any other piece of equipment.

However, being such a heavy base made of steel, it can be a pain to carry it to where you want and you have to make sure your feet don’t get in the way when setting it down.

My only other grievance with this particular product is you have to use it while standing directly in front. I don’t know how many times I’ve gone to put the barbell down to the side of the plate and it lifts the whole thing off the floor. 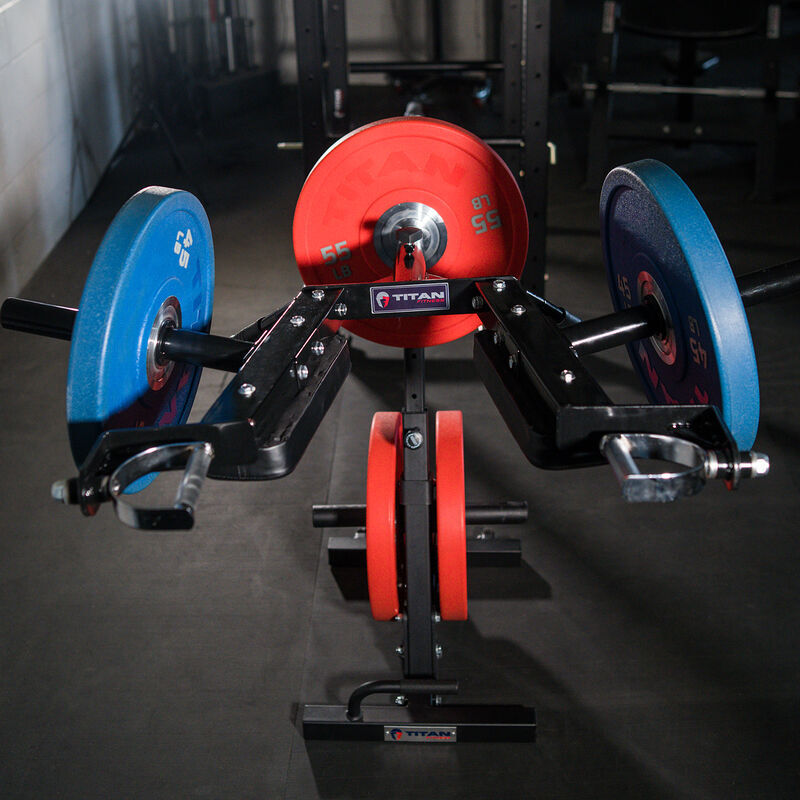 The Linebacker Squat V2 by Titan Fitness is an awesome landmine attachment. It is essentially a hack squat without the big heavy machine. If you suffer from any kind of knee pain, then this is the perfect option to still squat while not aggravating your knees.

Its design allows it to be loaded heavy which means it can replace your main lower body movement with a more pain-free variation. It can hold 650 lbs of external load.

Not only can it be used as a hack squat to place less stress on your knees, but when facing the attachment while squatting, you can perform “linebacker squats” where the load is always in front of you.

Perfect for combat athletes that are always having to manipulate opponents in front of them.

Further, you can develop crazy single-leg strength in positions similar to what you would find when shooting for takedowns. Loading split squats with a barbell is purely vertical. With the Linebacker Squat V2, loading is slightly more horizontal potentially transferring better to combat sports.

Using the handles, you can also perform deadlift variations making it an all-in-one piece of lower body training equipment.

The padding is thick at 2 inches so you won’t feel any pain when resting heavy weights on your shoulders.

To use the Linebacker Squat V2, you will also need the Landmine Stand as when loaded heavy enough, you won’t be able to pick it up to place on your shoulders.

Luckily, you can get both pieces of equipment as a bundle at a discounted price.

It is suitable for people of all sizes as the Linebacker Squat V2 is V-shaped so those with narrower shoulders will stand closer to the barbell while larger individuals can set up closer to the end.

One problem with this attachment is the loading. When placed on an Olympic bar, it spins a lot! So, if you put a plate on one side and clamp it, it will spin so you have to reach to place the second plate on a vertical pole which can make it spin again.

You must also be very careful with the barbell you use. It’s best to use a “cheaper” and stiffer barbell and not an expensive Weightlifting or Powerlifting bar. By loading one end of the barbell, it bends and if heavy enough, can damage your barbell and sleeve permanently.

If you have access to a thick or axle bar, they are a much better option than a regular barbell as you have less flex and rotation.

If you are looking to beef up your lower body training with your landmine, then this is the number one piece of equipment to get. 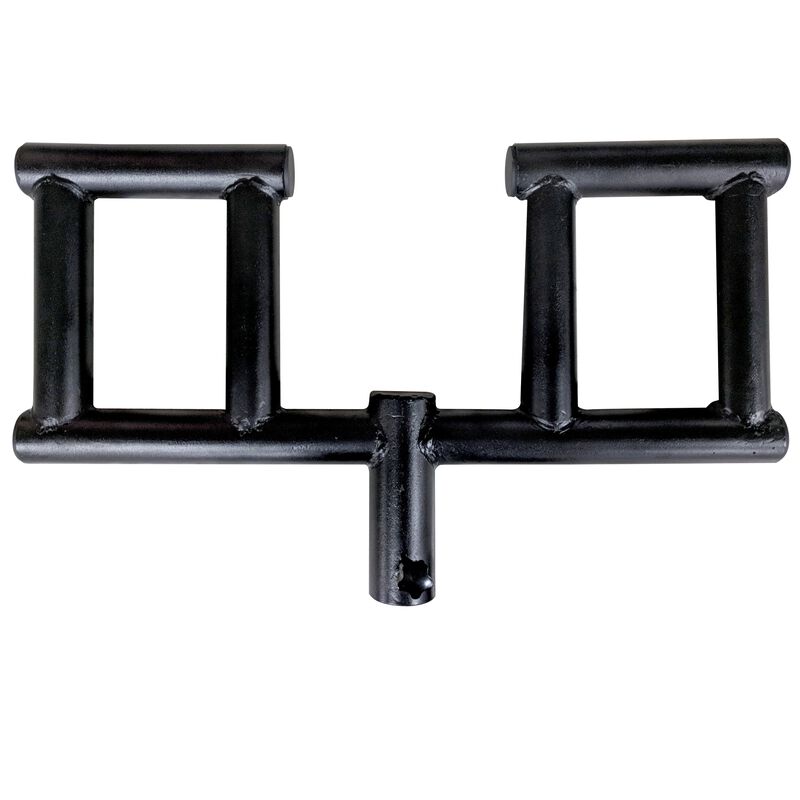 Why did I include the Viking Press V2 Landmine Handle when you can just press Linebacker Squat V2 Attachment? Mainly because of the thick handles, choice of grips, and the ease of loading.

Just like the Linebacker Squat V2, it slips onto the end of the barbell. But for this one, you don’t need to worry about awkward loading. Simply place the plates as you would normally when loading your barbell, then slip the Viking Press V2 Handle over the barbell sleeve.

You can press either with a neutral or pronated grip and the thick handle anecdotally feels better on the shoulders and elbows than a skinnier handle.

The Viking Press is one of the most shoulder-friendly pressing exercises. Many combat sports athletes struggle to press overhead due to their frequent hunched-over postures during training whether that’s boxing or grappling.

By pressing the bar slightly forward like a standing incline press, you don’t run into the risk of pressing into a range of motion that may aggravate any underlying shoulder issues.

The powder coating means even when you sweat, you’ll still have good grip with the handle. Importantly, like with most landmine attachments, make sure to use a cheap barbell as this particular attachment has been known to scratch barbell sleeves with its threaded stop pin.

Grapplers such as wrestlers and jiu-jitsu players require high-levels of lower back isometric strength and grip strength. The Thick Parallel Landmine Handle from Rogue attacks each of these physical needs for grapplers.

This attachment acts as a V-handle that slides on the sleeve of the barbell like a plate so you can perform bent-over rows with a neutral grip handle.

Holding the bent-over position is great for developing isometric lower back strength while the thick handle develops a strong grip.

This attachment is solid and very sturdy weighing 12 lbs. It’s not like your typical V-handle you’ll find in a commercial gym that would ruin your barbell. It is much larger allowing you to get a larger range of motion for your rows. It is powder-coated for extra grip and the fat handle is 1.9 inches in diameter. 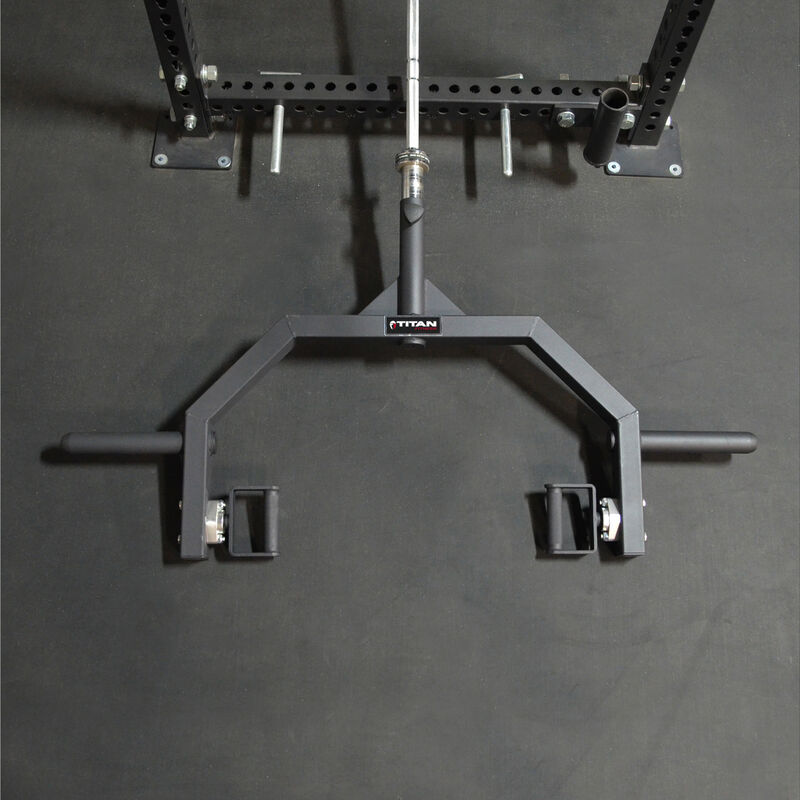 Why can’t you just use the Linebacker Squat V2 Attachment for landmine clean & jerks instead of this dedicated Clean & Jerk Landmine Attachment?

The larger space between handles means you can stand in-between without hitting yourself. The rotating handles make it awesome for performing cleans, presses, and jerks. Further, these handles can not only be rotated 360°, but you can also change the angle of the handles.

Weighing 33 lbs, it is heavy duty and can handle some punishment. This attachment very easily slips onto your barbell.

The Ultimate Iron Neck Review: Is It Worth It?

The Ultimate Iron Neck Review: Is It Worth It?